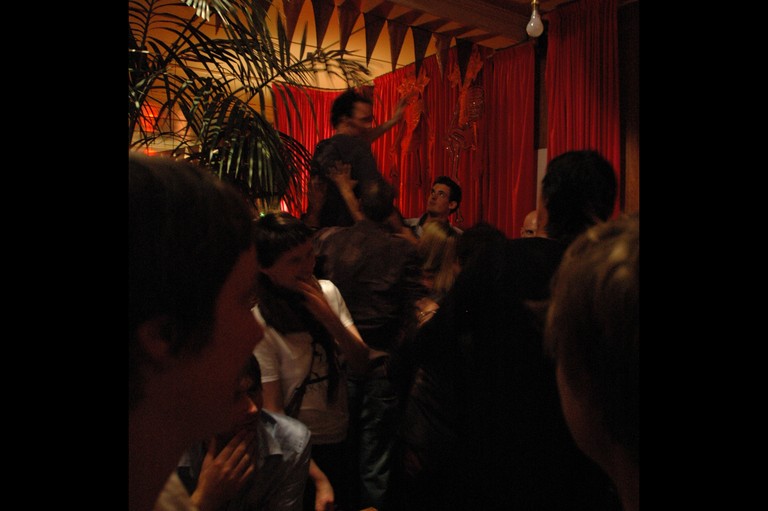 What's real? What's not? That's what I do in my act, test how other people deal with reality - Andy Kauffinan

Nature does not know extinction; all itknows is transformation - from 'Gravity's Rainbow', Thomas Pynchon

Some artists pick away at the fabric that we call reality, while others content themselves with a knowing critique, but few are as ready and really prepared to put a concept fully to the test as the perpetually in-flux artist Tao Wells.

Relying on the authority of an art gallery opening, Wells has drawn a curious crowd into his space, ever expectant of some validated art experience. He knows we're after art. That's why we've come here, in thirst of that art experience and eager for the stick-on badge legitimacy we call inside knowledge and real art credentials.

It's like John Lennon in the psychedelic 60s, over in India, whispering in the Maharishi's ear: "Can you slip me the answer?" That's how Paul McCartney tells it at least.

The room, or Enjoy, or Tao's room is filled with scientific and philosophical experiments, boyhood trophies glued together and data sketched...but The Artist's shorthand is indecipherable and The Artist, himself, has retreated into the comer, behind what looks like an upturned skateboard ramp.

"Get on with it" a voice interjects into the gallery. The voice belongs to David Raw, local comics artist and a man suspicious of art.

But The Artist stays put.

"Is this it, aren't you going to entertain us? This is so goddamn pretentious!" Raw continues...then, provoking comment from the silent Artist, picks up and relocates a piece of Wells's sculpture.

The Artist, his skin easily pricked, explodes from the corner and grabs Raw by the scruff of the neck and hauls him out of the gallery.

The crowd wonders, is this art?

Wells returns, and after more arguments among the audience, the crowd is led out onto the street, down Cuba Street to the pub The Mighty Mighty, full of Saturday night patrons, where The Artist buys his audience a round of jugs of beer. Perhaps now they'll be more receptive to his message. 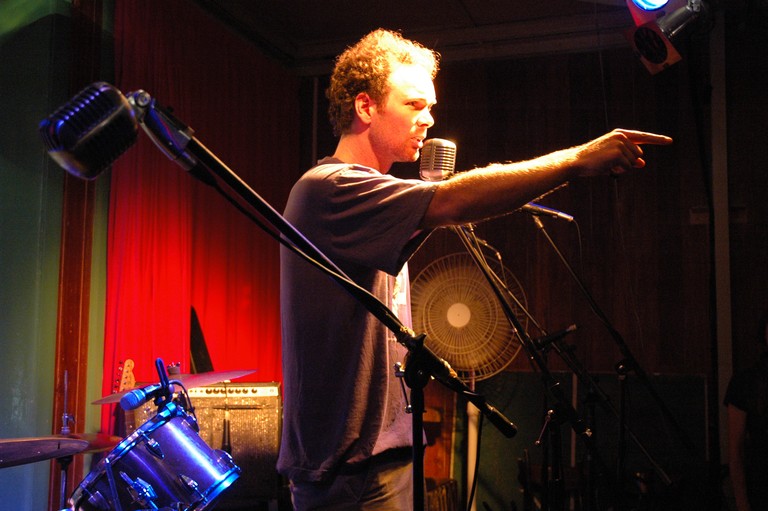 Wells steps on to the stage. talks or rants into the microphone about haw no one "gets" his work and that he's a real avant garde artist and to hell with all the rest. Ranting, ranting and more ranting becomes a litany of complaints against a shadowy technical establishment ...until a group of choral singers slowly emerge from the audience to lift Wells above their shoulders and carry him triumphantly out of the bar in the splendor of a teenage fantasy.

But back to Enjoy and the difficult artworks, a year's work presented in two days. Wells has constructed a maze of optic puzzles for the disenchanted, clues to a de-patterning philosophy of gravity which Wells describes as "an analogy to counter Plato's Cave analogy. of reality, and Christian religious use of light as the single metaphor for truth."

Wells has positioned himself ina standoff against the Enlightenment and all its unwitting adherents. It is a position of perpetual antagonism against a system of thought that is not aware ofits own currents or ori­gins. In many ways, it's as through Wells has set about building himself a time machine. But at present, plans remain scattered about the ground, diagrams tacked to walls; while, promisingly, a window intersects through a table. The simultaneity of all history has been declared and Wells is leaving town for some other space.