Terminator three was a woman

Everything next is written for money, shifting writing whatever I feel, to an abstract task pulling me along a line I wouldn’t have walked, this is work. I lost interest by the time Terminator Three came out, she should have been so kick arse instead she meandered around throwing stuff, the Apocalypse is an epoch that you can experience working, poetic widows yearned for, searching ashes for meaning.

Instructions have indicated that this is not a review, is it a love letter? I’ve preferred oral submissions in the past due to their performance over time, rather than having some moron pouring over your insides, cave equipment rope and lights attached to the lungs of a breathing bird, how can I say that the poetics of this show were defensive? That the best bits were how it didn’t work, that it had the ambition of an android to re-populate the earth and no CUNT no COCK, a neutered nurture drawn on glass, maybe just a light sketch etched.

Of course this is why I laughed, I said to the artists “your talk went right over my head, you sound like you’re straight out of art school”. I appreciated the gap and breath that happened before their reply attack ensued, sharp and full of the glamour of someone whose haute couture has been mocked, but the new tone included me. Thanks. I meant that I didn’t enjoy being sold to, the show as you described it was invulnerable, didn’t need audience its responses were figured out already, cold ticks them off, but I didn’t get that, I thought there was poetry somewhere in the room but the art, well it could have been made under a pseudonym there was so much baggage to get through, guns, ammunitions from so many site specific cultural war fares. Art, if it wants to be art, is in line with a whole lot of other super commodities. I was kind of hoping that the catalogue would fall away, rot, I just wanted to know that these new people were speaking about delicate brushes with material and form and space in a way that made you think but not about anything in particular.

I remember one of the artist’s comments; the shine from the ball against the bow of the sagging silver sheet, yes that was important, YES it is important I know what you mean and how dare you say such radical statements, no I don’t need to know that Sol le Witt’s TM grid gave you what. Now I’m confusing the experience of the show with the artists and what they said the impression they gave me... somebody say something make them pull back stop hitting us on the head with references from art, I am not in the mood to trade horses I want to float like the ball in the room, where the strings are left to trip all the un- suspecting idiots looking out the window cause the object is so fleeting that life keeps taking over. I feel the whole thing works as a lead off to a virtual experience of art, the real being a completely constructed space. One that on entering you are stripped of physicality and enter as eyeballs to roll around utopian landscapes of dreamers with history books and poems handed down by our fore fathers... dreaming of four mothers... or vice versa. 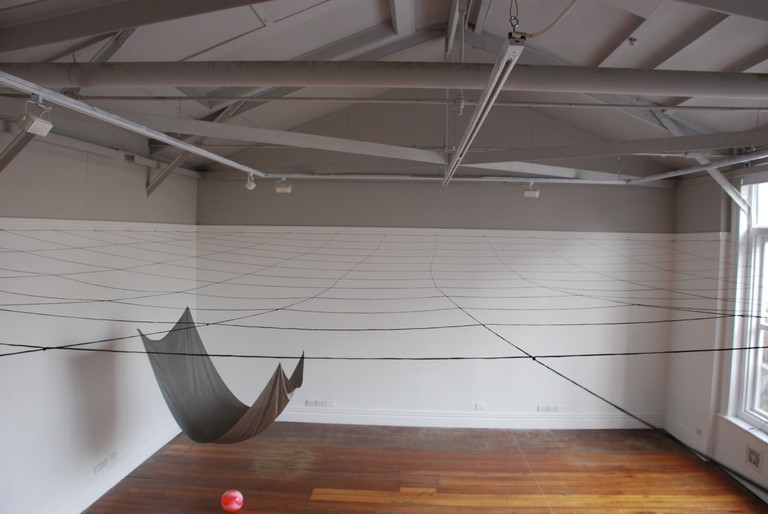 Leading to Form is where the curator as artist produced by an art school has recently shined brightest and is trimmed the neatest. Sarah Rose and Holly Willson together with a whole lotta other people run NEWCALL a good looking gallery in Auckland that has been putting on an eclectic if not down right exciting mix of shows since the beginning of the year. Great angle, being part of gallery, says that you know your shit, and at the Wellington artist talk they delivered a meal of intentions and historical frameworks.

Now writing about this reminds me to tell you what I saw when I entered the gallery, their show. I burst out laughing with a good natured giggle, I had the sensation of joy that parallels the reunion of a sock and a sock that you have missed being presented in a public exhibition, as a three dimensional genetic hybrid computer simulated clone thingy now accidentally purporting to know the way to the door of the future (I’m next door you dropped me).

Enjoy has rules for curating, I drew them up from much experience, I was trying to draw attention to this battle in technology, this conversation about who gets to write the history is tested in roles, same as acting, actors playing curators, artists, a few rules for the transparent engagement around the power to present, who owns the projection? Who writes the marketing art... this jockeying for power is entrée to the bit about writing prose around responses to art works so here I go feeling suddenly generous (a loan from others who’ve done me).

In this show I was given the option, to be in a virtual world, made flesh and real in this world. I’d heard that most toddlers, when faced with a spider in a virtual world, smash it with virtual hammers, that glee of feeling free and able to smash the delicate of things you don’t want to understand slammed in my face or rose like an air bag as my body crossed the threshold from outside door to inside gallery. My laughter was a joy that was seeing the gallery’s redundant old-fashioned values laid out like books at a used cloth- ing store. They were interesting books, but really they were not to be seen as books at all. You should see the adventure the rush of pleasure that words tumble when ingested in the mind’s eyes cycle of love inside a mind’s mind that surface was smeared all over this space little lovers were insecure and precious about how they were fucking in the open without blankets, but not raw lust carried them through no, it was aesthetics, old fashioned aesthetics, liberated from gravity and sent into three dimensions as if photo- graphs were out thoughts, and thinking came with a flash. A crowd around a screen. Look at me I took this is it poetry, will you see and agree with me? It’s like something I remember seeing before.

Remember when you saw that thing, and you read that book and now we’re here in the future reading it in our mind’s photo album, What did I take home?...Ambition. Ambition to be a soothsayer to read the patterns of time like a throw of the dice a hand full of ruins. I’m being asked to trust their readings of the future, but I too can read. No mind, an echo is can you read. (I’m going to write for 30 more seconds)

I wanted to be them like I wanted to be terminator, see the world through the eyes of a good looking camera (with sound) and line up my enemies to my state of being and roll them through my poetry and watch them come out smelling of flowers. Of plastic or something as good as real. It’s fun.