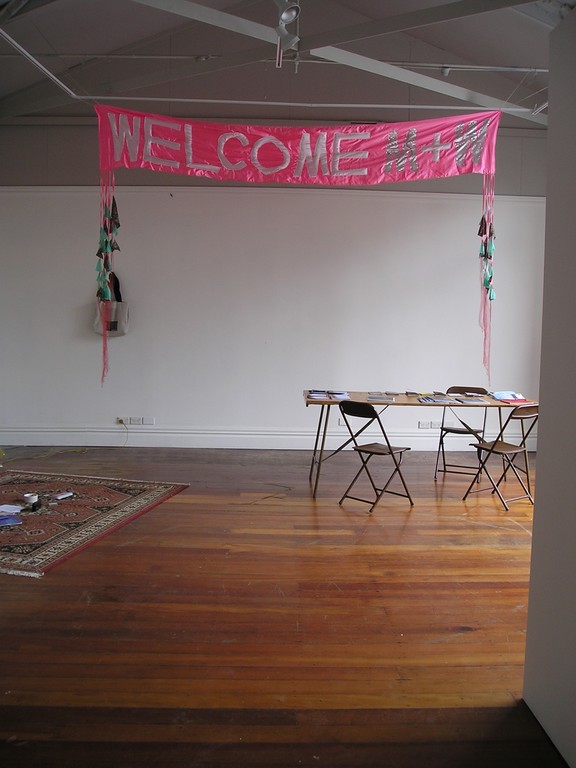 There is art. And then there's the artists, the curators, and the writers and the critics, and the people who are just interested and go to the galleries. The system is like an image of a molecule with the nucleus at  the centre and the electrons swirling around the rings outside. Or perhaps it is better to make comparison between the art world and a tree diagram; all the relationships connecting, stemming and extending off over the page.

I've had a few conversations with artists who perceive curators or arts administrators as nothing more than the banal cogs in a faceless bureaucracy that works to exclude and manipulate artists themselves. But while there may be some people out there who work in the arts for the free booze and occasional canape, to assume that all curators, art writers, co-ordinators and facilitators of the arts work solely to see their own name in print is ridiculous. The structures behind and around the visual arts in this country are complicated, and the community is small, but behind many exhibitions and artists are often one or two advocates who are passionate about seeing the artists' work given the credit and audience that it is due.

Enjoy's Summer Residency has, of course, traditionally been taken up by an artist. M&W are not visual artists but art writers, curators, administrators, project managers, opening attendees and gallery trustees. Their decision to apply for and subsequently receive the gallery's Summer Residency demonstrates the continued importance of these usually peripheral relationships, and the outcomes of the residency revealed the benefit of having them foregrounded. The residency gave these two practitioners the opportunity to do what they do best; meet people, talk and write about art, and tease out the relationships between audiences and the contemporary visual arts in New Zealand.

M&W, commonly known as Kate Montgomery and Harold Grieves, are familiar figures in the contempo­rary arts scene in Christchurch. Both have served on the Board of Trustees of High Street Project (HSP) for a number of years. They have written funding proposals, looked after the gallery on quiet Saturdays, drank sponsorship beer and had itinerant artists sleep on their couches. But most importantly, both are great writers. The majority of the critical and engaging writing which has been produced by HSP in cata­logues (DIY or otherwise) over recent times has been written, or prompted by these two. Thanks to their efforts, HSP maintains a rigorous engagement with the shows that it hosts, and an extensive archive of interesting written documentation. 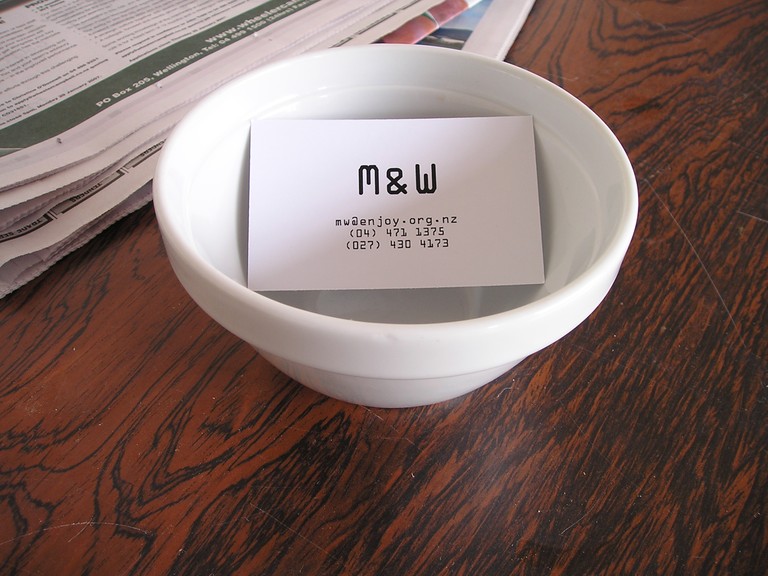 As an arts administrator, I have been a writer of various funding applications and I have some knowledge of the language that needs to be used to pimp project spaces such as HSP and Enjoy. It's not enough to say that we really like contemporary art and we want to provide a space and some money to help good artists make more of it. You have to "support, foster, advocate" and "facilitate a critically engaged environ­ment to connect with the contemporary visual arts." It's amazing how quickly these words seem to empty themselves of all meaning on a cold Wednesday night when there are two people at the artist talk and most people want to be at home watching Scrubs reruns on Tv. Perhaps the most important thing about M&W's relationship with the visual arts in Christchurch has been to make the words "foster" "support" and "critically engage with" really mean something at HSP and in Christchurch, through their writing and continued day-to-day interest.

During the Summer Residency at Enjoy, M&W were able to extend their relationships and connections with the contemporary visual arts community in Wellington. Instead of being a receptacle for objects, the gallery became a meeting room and a space for ideas to be exchanged. A table was laid with the publica­ tions that HSP and its affiliates have produced over the years, and a mat and cushions were laidon the floor. The gallery space became provisional and secondary to the relationships that M&W were able to strike up, the emails they could send and the phone calls they would make.

While aims and quantifiable achievements for this residency were loose - I assume the residency was as much a learning experience for the gallery as M&W -the pair produced some publications which not only presented new art work andwriting,but could also be a product of the generative relationships that they were able to create during this time. For a number of years, Grieves has produced thejohndoryreport, a publication of artists' writings, images, and critical essays.The time, space and energies created by M&W's summer residency are appropriately collected inissue #10 ofthis art zine, assembled and written predominantly during the residency and released a couple of months afterwards. Given its eclectic and contributor-driven ethos, thejohndoryreport aptly reflects the series of chance or planned meetings that M&W participated in over the summer months.

Another outcome of the Summer Residency was the exhibition as far as I know, which was curated by M&W at High Street Project in May of 2007. The flow of ideas and artists between cities in New Zealand is relatively frequent; in our small country it is easy to zip about, and M&W have always been keen to see new art and meet out-of-town artists. Inview of this, and given impetus by the artists that they had met in Wellington, M&W brought together the new work of Hamish Palmer, Arie Hellendoom, G. Bridle, Marnie Slater and Arny Howden-Chapman to exhibit at HSP. The show was great, though it is not my job to write about that now, and it feels a bit strange.1 I'm writing about the art writers, not the artists. As curators, administrators and advocates, M&W were able to bring together five artists from Wellington and expose Christchurch audiences to the kinds of contemporary practice taking place in the capital.

M&W are always keen to highlight their limitations. The writing produced in and around the residency is peppered with acknowledgements of the provisional nature of their activities. This is exemplified in  the opening line of thejohndoryreport #10 that reads: "Our calling card attests that 'the love of knowledge coexists with the finest capacity for ignorance' and we have always been the first to acknowledge that ours is a hands-on and consequently fallible approach". The duo are even wary of the haphazard fiction of the M&W brand, which was itself initially created as a kind of joke for their collaborative projects.

M&W seem most comfortable operating as transparently as possible; an opportunity that was afforded to them by the Summer Residency at Enjoy. Within and around the rough framework of the residency they could get down to what they do best, writing, conversing and building the discursive supports which the contemporary visual arts in New Zealand so often lacks.