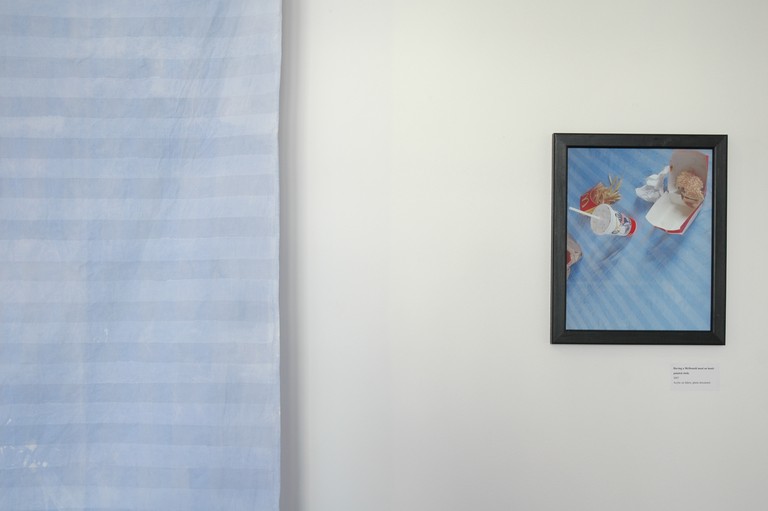 ‘...after the exhibition, all the works were sent away to different people in Wellington. Some of them didn’t even know me.’ – from Lee Kit’s website

‘I prefer to make the works for the individuals in the public rather than with/in the public.’ – from Lee Kit’s Enjoy press release

I’m the caretaker of a photograph by Lee Kit. I describe it to myself variously — dishes drying on a tea towel, dishes drying on a painting — the label on the back of the framed image reads, ‘Hand-painted cloth used in kitchen, 2007-08, Acrylic on fabric, photo document.’

Kit’s exhibition had a textural quality to it. Written and poetic instantiations were realised in phrases that had been painted directly on to cushions. ‘Nothing’s gonna happen without a warning’ and ‘from revolution to revelation’ were two examples. In other cases the works promoted or implied language-ready qualities at a more abstract level, where the intimacy of certain communicative gestures was disrupted or amplified. Kit’s conversations and meals with locals during his residency, often documented in photographs, meant that language as a tenant of intimacy and thought was provoked and mitigated.

Sometimes people come from a great distance to show you something. The artist came from Hong Kong in late 2007, and one of the best questions the artist has asked since then is this; ‘How fast can I run away from you in 2 seconds?’ Indeed he has conducted a range of experiments, and I often wonder what kind of lives he has lived in those ‘sparks’ of time, for it is clear to me that in two seconds one can live a very small but important life. True, one might be fleeing a range of catastrophes — the pillage of ones goods, the crime scene, the stranger or scary familiar, the crush gone wrong — yet, one might also flee towards something, leaving the exhausted life behind. I remember talking to Sally about these phenomena of brief lives. As I talked with her I remembered that the artist from Hong Kong had also written, ‘from revolution to revelation,’ on a cushion at one time. I considered the boundaries of revolution, and how revolution might lead to revelation, and I made an intrepid plea, one that I put to Sally directly; ‘Shall we run?’ In hardly any time at all we’d made worthy progress across the floorboards and I thought, ‘I’m fleeing and Sally is fleeing, and I haven’t a clue what kind of life awaits us on the other side of the room.’FTN1 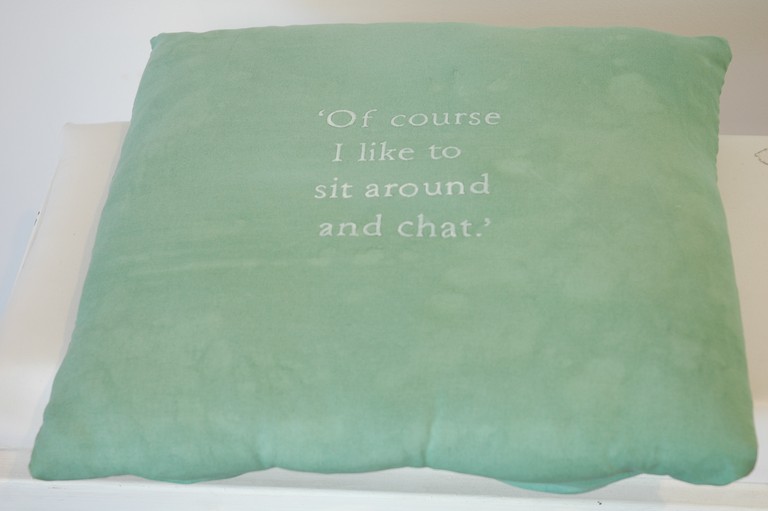 A number of the objects in the exhibition worked as declarations. I considered a few to operate as vocal parchments: (Will you take this work home with you? Yes I will, thank you) and others as ground for more anecdotal tête-à-tête (Pass me the potato salad? Can you wash the hand-painted cloths in the washing machine?). His collection of hand-painted cloths, which were variants on the humble tea towel and chequered tablecloth, provided the ground on which meals and conversations took place. The hand-painted cloths, in particular, motivated Kit’s practice in the direction of sparks of exchange. They also gave shape to what I would call a fictional ready-made, tailored by the everyday.

Part of the pleasure of experiencing Lee Kit’s exhibition came from spending time with him, and knowing that his consciousness of meeting and forming connections with strangers was part of the aesthetic potential of the work more generally. My meeting with Kit was brief and thus there was a sense of a truncated interaction. This is perhaps the typical experience of the visiting artist. Kit was only in Wellington for a few weeks. English is his second language. He is learning new names, and making work as he does this. His best works provoked in me this thought or desire for locating time where there was none. I considered the everyday, and how it might be extended, elongated, and protracted in its provisional temporal proximity to the ready-made.

In everyday situations language assists our attempts to inflect life with subtle variations of judgement. We say so and so is late for work or, so and so is fired. We say this is a painting and this is a hand-painted cloth. Lee Kit’s work also tapped into how judgement might operate in everyday situations of communication, and enable us to expound on experiences infused with temporal expectation and demand.

Language functions at times in Lee Kit’s work as a border territory. Language borders abstraction; it touches the personal; it bites into the airtight. Language is important to the act of thinking, which one could say helps a person distinguish responsible action from obedient action.FTN2 These border companionships that language lit up in Kit’s work and exhibition could be seen to operate as staged fictions. These fictions entailed tangible responsibilities, and though it is unusual to think of fictions compelling philosophies of action – this was a key part of the terrain that Kit’s work underscored.

The viewer and artist in good faith undertake the fictions of the (Ready-made) Everyday. The title of Kit’s exhibition is apt here. It suggests that the potential for individuals to live a life or series of lives, short or long, and yet rich and full, is contingent on the ability to think in time with others, for the absence of thought leads to disaster. It is the exhausted un-thoughtful life that is worth resigning from. The thoughtful 2-second life takes place in the border territory of the ‘Ready-made’ and the ‘Everyday’.

After the exhibition closed, Kit asked people he had just met, or didn’t know, to take his works away with them, and to store them, display them, possess them and sometimes, after a short time, give them away again. Kit’s gesture connected again with the as yet un-disclosed 2-second life, which can be seen to be less about usurping the future for its benefit or warning it of the past, and more about thinking the 2-second life into existence.

Through these fictional brief lives, Lee Kit asserts a connection with the everyday, in all its temporal waywardness, as a way to think through assumptions about the individual’s place in society, individuality which is entirely contingent on life as lived in a world of others. Could the thinking individual live a life in as little as 2-seconds, and create out of this fiction of flight one of the most plural kinds of life?