The Weight of Jupiter

The day of the opening the hue above the hills of Upper Hutt was apricot. The light diffused, faint as a Rothko. The sea a blue sliver of shining knifae. The students were graduating and I came out of the shop at lunch time and watched them walking along Lambton Quay in their black caps and capes, each degree a splash of colour. Pale pink for the arts. The bagpipes ushered the smiling students along. It was a day to reflect on success, a rite of passage. The future awaits and it doesn’t always come with a ribbon. Later, I trudged towards the exhibition opening in the dark of night, abandoning another day in retail and preparing for the satellite world of contemporary art.

Up the top of the narrow stairs the three works at Enjoy exhibited a lightness of touch, their meaning was vaporous, difficult to grasp. Planes of color—or its deficit washed over the walls. On the wonky wooden floorboards, 50 yards of bright green ribbon was curled into a nest. This work had so much kinetic potential. I wanted to drop a cat, wild of temperament and claw, into its midst. Once, years ago, I arrived home to my Fathers house to find reams of toilet paper curling along the corridor. My Father’s cat (the artist) sat at the end of this trail, licking its paws. 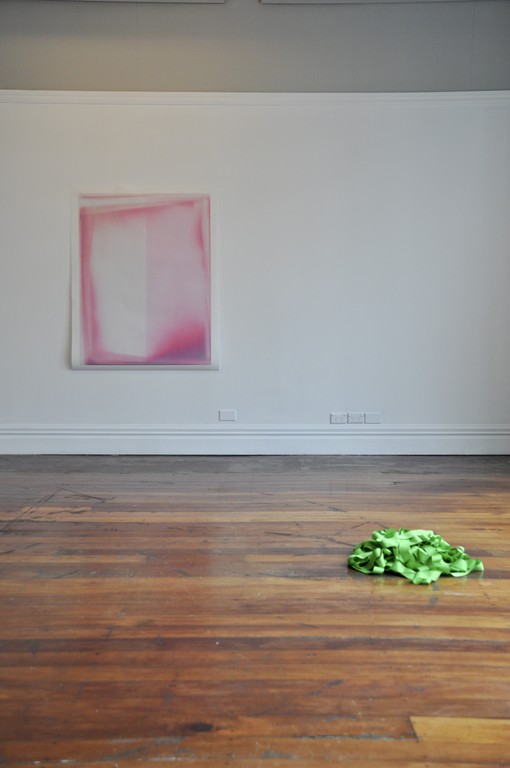 The ribbon was the most problematic work. Splashed on the floor the loopy green ribbon accentuated the pink blush of Lisa Benson’s nearby abstract photograph. These two works were clearly getting on well together. But how was I meant to respond to the ribbon? With delight or quiet outrage? Or perhaps just a cynical smirk? At the very least I managed not to step on it during the opening. That’s one of the many problems of installation art: you have to be careful not to put your foot in it. Sprawled on the floor like a drunken gallery goer, the ribbon was an organised mess. But who said contemporary art has to behave?

I considered the artist, Rossana Martinez, in her moment of play, like the cat, working freely with her materials. The forces that drove her were probably mostly sub-conscious. Later I found out the artist emailed the gallery a set of instructions from New York. The ribbon was hard to find, eventually located in a bridal shop in the depths of Palmerston North—via cyberspace. Martinez requested that her work be arranged in a hill formation—a homage to New Zealand, home of many hills and paintings about hills! A volunteer had stood on a ladder and looped the bridal ribbon into a mound. This seemed a satisfying conclusion for the ribbon, freed at last from the bridesmaid’s skirt.

Lisa Benson’s photographic work on rice paper was that touch of early morning Rothko I glimpsed over the glittering lights of Petone. This was a delicate work, pink hued and pretty but not in a Katy Perry kind of way. The lines of colour were at once reminiscent of Wellington sunrises, frequently salmon over a metallic wedge of sea. Yet, there was also a futuristic angle at work - the palette and planes of Logan’s Run. There was a quiet confidence here and the process was subtle too: the artist’s materials consisted of gathered light. John Hurrell has called Lisa Benson ‘the most exciting photographer’ working in NZ today. Trawling her website, I’m not surprised to find photographs of sparkling snowscapes, decidedly lunar in appearance.

The long and large wall painting by Zoe Rapley was hard to see at the opening. People were standing in front of it, wine or beer in hand - white shoes worn with panache, a whiff of corduroy. Rapley’s work was slightly buckled like a massive piece of a house coming away. For an ant this work could have been the surface of the moon. My first instinct was that I’d like to look at the painting (is it a painting?) lying on the floor. This would also have been easier for the ant. Intricate charcoal swirls covered the right hand corner. The gases of Jupiter? The doodles of an obsessive day dreamer? Or the topography of a map taken from a satellite suspended in the depths of space? The work emitted a sense of melancholy. It felt distant. Although I was told the artist’s studio is in Lyall Bay. This seemed apt. Lyall Bay has always been a windswept place, the houses along the beach are battered and worn by the onslaught of sand and sea. I could imagine the wind howling off the shore as Rapley, rolled her paint. She had presented us with a panoramic view of the surface: but what do we see? 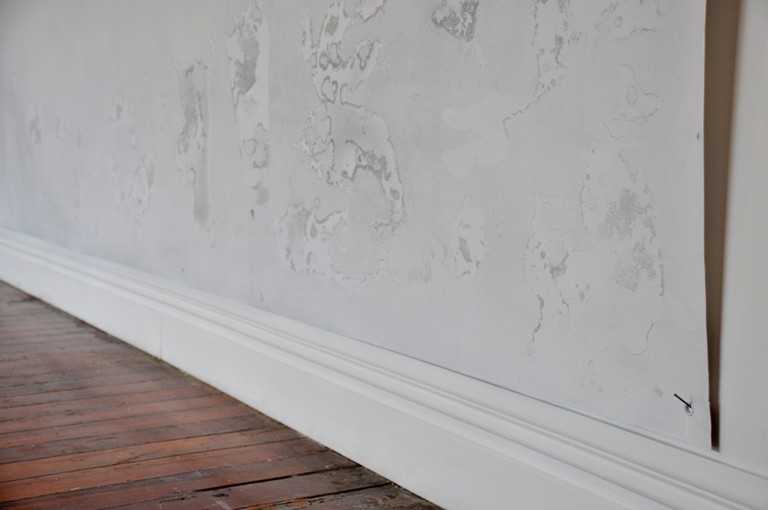 Just what is the weight of Jupiter—50 yards of green bridal ribbon? When is a photograph like a vapor? The hands of the artists dipped in and out of each work. Erica van Zon, the curator, wanted the exhibition to touch on the sublime. Enjoy is a gallery that supports these strange migrations into the mind. On earth we like to look at the solar system and marvel at the planets as though we are something apart. Back down on the ground in Wellington, the national Budget was about to be announced, and it wasn’t going to be pretty. Somewhere underneath Jupiter’s surface of gases there must be a solid crust...