I wasn’t able to see Katrina Beekhuis’ show Walking Backwards at Enjoy Contemporary Art Space in person due to geographical distance and bad timing. This text is therefore a response to a simulated reconstruction of the show pieced together by photographs and texts viewed through my computer screen. My experience of the work has been mediated through layers of ocular and lingual translations which inevitably allow for slippages and misinterpretations. These images and texts that I’ve scrolled through have in turn become faint impressions in my mind, adding yet another layer of distance. Confronted with the white page, I’m tempted to refer back to those photographs and descriptions as signposts for writing this textual response to Katrina’s work and yet part of me also wants to stay with the intangible memory of those reproductions to see where these soft echoes lead me. I close my eyes in an attempt to get closer to the spectral objects, cutting from my clearly defined surroundings to the grainy black behind my eyelids: a small reproduction of a painting by Miró; delicate blinds that barely obscure the light; an airless vent that has been carefully cut into the surface of the gallery wall...

On Saturday afternoons we would gather around the dining table and play games from a book called Mega Memory that our father had bought from an infomercial. One of these memory games involved reciting a list of everyday objects that were each assigned a number. Dad would call out the numbers at random and we’d have to respond with the correct corresponding object. The game would begin simply but became more complex with each iteration. A window. A stained glass window. A pink, green and yellow stained glass window. The main objective of doing these exercises was to develop our skills in retaining and recalling data in order to excel in our studies; a common preoccupation for immigrant parents. But even as a child I sensed an underlying anxiety that memory was so fragile it needed to be cared for with the utmost attentiveness and rigour.

a flickering  of the world

in and out of focus 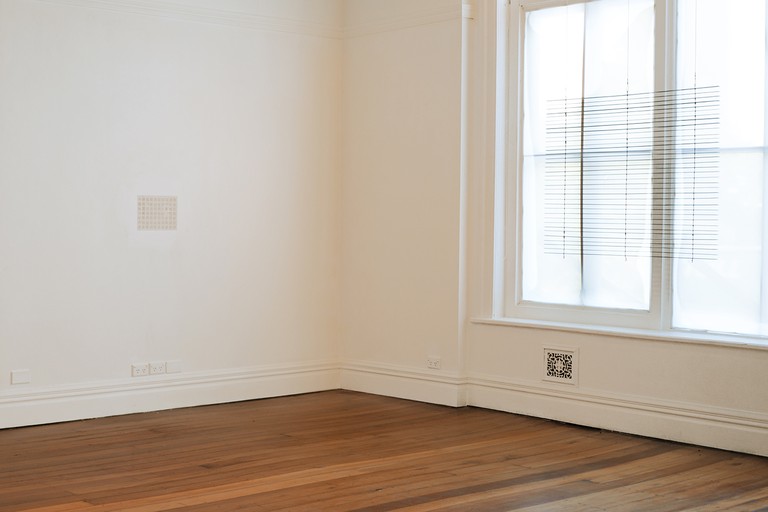 I recently watched Laurie Anderson’s Heart of a Dog (2015) alone in a dark cinema. With a loving nod to Chris Marker’s La Jetée (1962), the film collages together moving and still images, some of which were filmed by the artist and members of her family, other images are drawn from the interminable well of recorded human visual data. Over this stream of carefully edited images is a sound track of Laurie Anderson’s distinctive voice and experimental sonic compositions. This disembodied voice narrates a story, whilst also self-reflexively meditating on how “creepy” stories are in the way that they pervert and edit lived experience; something or someone is always left out or misrepresented. The images on the screen are warped by filters, handmade marks, speed and in some cases by time itself, drawing our attention to the artifice of what we are seeing and hearing. In one particularly uncanny moment, footage from a surveillance camera of an anonymous pedestrian is played in reverse so that the figure appears to be walking backwards. Over this disorienting scene, the artist offers an aphoristic quote by Kierkegaard, “Life can only be understood backwards; but it must be lived forwards."1

As a child I would frequently walk backwards. This was one of many unconventional approaches my sister and I experimented with in order to mix up the mundane routine of walking home from school. Although there were disadvantages and limitations, one being that you couldn’t see what you were moving towards, there was something compelling about watching the things you were moving away from becoming smaller and smaller and smaller. When I started high school I began to walk in the same direction as the adults. There was the occasional rebellious movement, but I had become so acutely aware of my strange body that I did everything I could to disappear into whiteness. I would gaze at the clock in science class, watching the black lines inch their way slowly around the white circle. I’d drift in and out of the lesson, not out of a lack of interest but because it was impossible to think of anything other than the passing of time when it hung above us like a god. Decades have passed and that room is now submerged in mist. The only thing I can vaguely recall is the teacher’s description of a phenomenon in which a planet appears to move in the opposite direction to the surrounding celestial bodies due to the viewer’s vantage point. 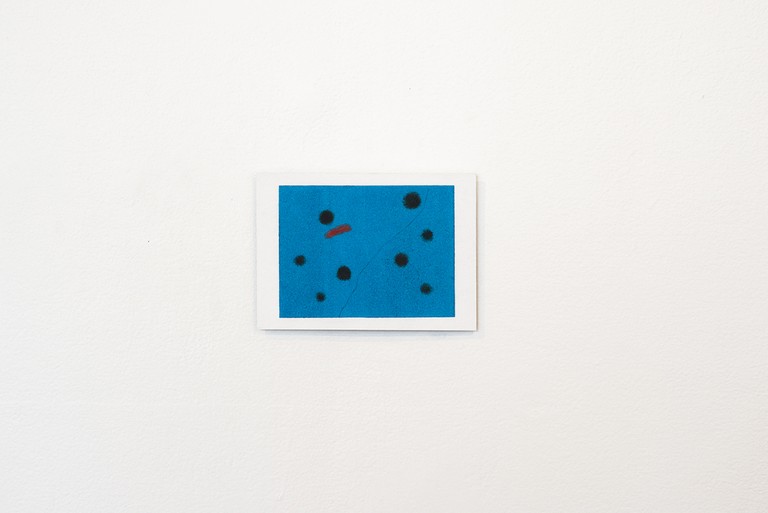 What does it mean to walk backwards down a footpath in a world where people are always walking forwards? For weeks I’ve been reflecting on this question that Katrina poses in the text which accompanies her show. It is a question that she too has privately reflected on in response to observing a woman routinely walking backwards on her street and which she then offers to a wider audience to consider. There is a trace of reticence in Katrina’s observation; she confides in us that she mostly tries to see the action for what it is without being voyeuristic or overly-romantic. Yet sharing these private thoughts publicly might suggest that there is an impulse to make sense of this defamiliarising observation. I admit that I have found it hard to resist imposing meaning on to this woman’s backwards motion. I have thought about the strange surveillance footage in Laurie Anderson’s film along with Kierkegaard’s words and wondered if perhaps this woman makes visible our collective desire for time travel; altering the past with the knowledge of the present. I have thought about the planet that appears to move in the opposite direction to the other bodies and then remembered that all bodies move in an elliptical motion around the sun. No bodies move forwards or backwards, only in circles. Maybe this woman’s anachronistic movement draws our attention to the illusion of linearity. I have thought about Susan Howe’s assertion in her subjective literary biography of Emily Dickinson that a poet is a mirror.2 Walking backwards in a world where everyone appears to be walking forwards might be writing a wordless poem with the body.

I received an email from Katrina the other day that contained some notes she’d jotted down in response to reading an earlier version of this text. I scribbled down fragments of her notes in my notebook; the words levitate on the white pages like an imitation of an aleatory poem by Mallarmé. The unstable and intangible quality of these words ripple throughout the layers of encounter in both the creation and experience of Katrina’s work. She attempts to give a solid form to everyday encounters with objects through a process that continually shifts between objective and subjective points of view, softening the boundary between these seemingly oppositional ways of experiencing and knowing the world. The slipperiness of these encounters is further refracted through my own distanced experience. It is an imperfect translation of an already imperfect translation in which meaning is lost and meaning is created in a continuous cycle of transmutation.

a ghost of encounter 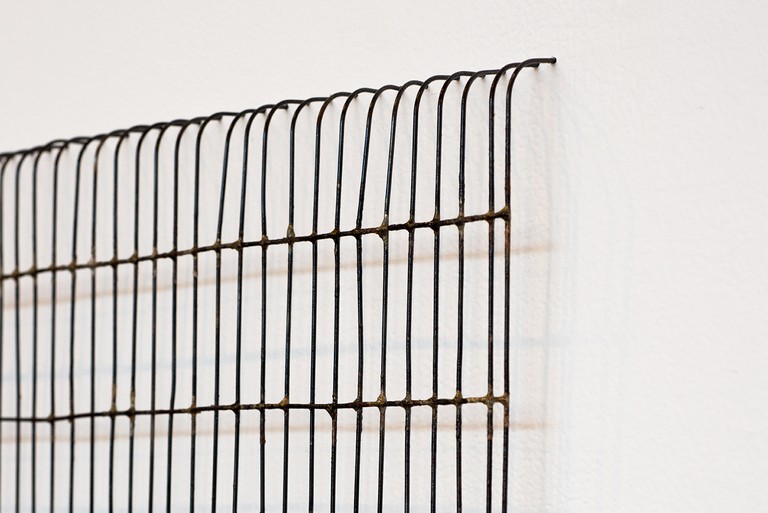 In her essay “Soft text and the open line,” poet Lisa Samuels’ writes that “soft text is the alterity, ghost, futurity, prefiguration, and/or potential otherness of the hard text line."3 Soft text is spectral; it is everything that is unuttered but that exists in the spaces in between and around the hard and concrete. Multiple soft texts haunt the hard lines of this text that you are reading; my thoughts; your thoughts; Katrina’s thoughts; all the other possible versions of this text. It is a deafening silent chorus. The potentiality of the soft text that hums in the expansive liminality between and beyond these words are far more exciting to me that the limitations of the words I type and yet they can only exist in relation to the hard text. The hard and the soft are inextricably linked, casting shadows upon one another.

a shadow of that thing we can’t always encounter

I self-consciously delete a sentence in which I write a summative interpretation of Katrina’s work, aware of my recurring impulse to force connections and pin down what ambiguously hovers. I know the myth of Icarus’ flight to the sun with wings made of wax too well to hubristically attempt to get too close to a thing so distant.