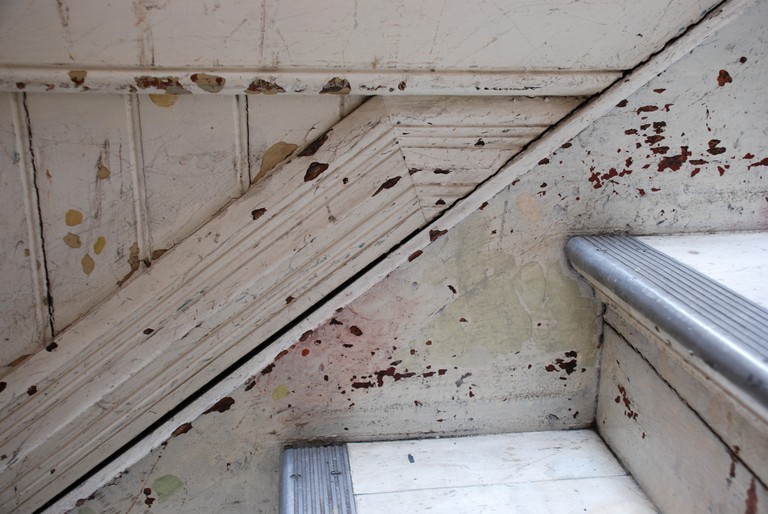 Raewyn Martyn kindly gave me and another interested party a tour of her work as featured in the joint exhibition, Landing, with Noel Ivanoff. We spent a lot of time hanging out in the stairwell where most sampling of stains involved in the work had been done.FTN2

Observing existing stains, marks and ambiguous smudges, Raewyn first worked at mimicking select surface architecture of the stairwell. She used a set of base colours, forms and ‘dirty’ skills derived from the kind of stain-history available to the eye. Acrylic, dirt and water were then applied or removed from the space as necessary.

I imagined the process to be a rather idiosyncratic way of using colour test-pots—admittedly test-pots that you manufactured yourself and only used when you needed to ‘degrade’ your home or work environment. 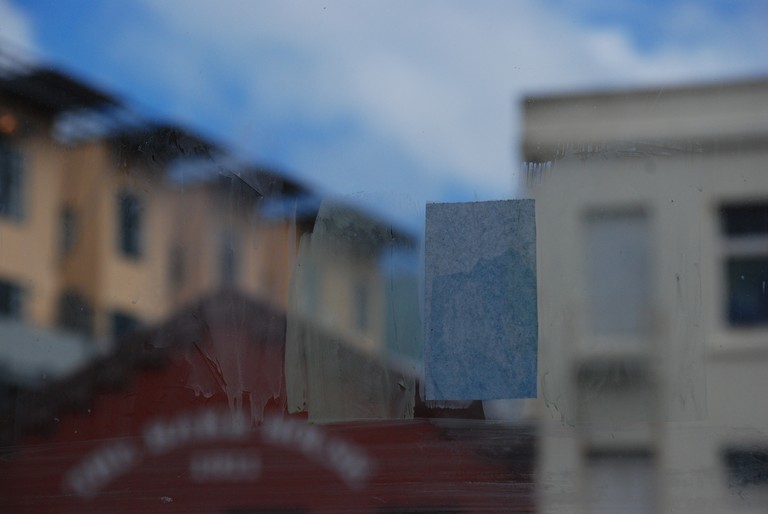 Looking around I could see a tile that had been replaced by a square of canvas that was fast accumulating marks from shoes and streaks from less obvious trespassers. On the floor there were spots that the artist had burnished, not so much to reveal a history of paint underneath as to reveal a future, an opening. Each opening had a strange quality to it—like a coin squished underneath a train, comical and still warmly dangerous.

A large piece of canvas was also compressed against the side wall of the stairwell, and painted to blend neither giving away any secrets with a blush, nor intentionally withholding information—it was simply behaving like something newly ‘out in the open’. There, but somewhat unverifiable.

The three of us spoke in fits and starts about the limits or opportunities of interaction between a viewer and these ‘paintings’. The body, or evidence of its passage, was absorbed by the materials in some cases, like the marks building on the square of canvas. In other cases the body was rejected in favour of premeditated intervention, as with the added stains, or newly missing splotches, or watercolour patches on the Linoleum floor and the woodwork that led up to the gallery proper.

Admittedly much of this was invisible even to someone like myself who has used the stairwell for years. I don't take an itinerary of stains; such things are far too subtle and incremental. I couldn't tell from memory what was a ew stain and what was an old one. We are rarey possessive of such things as a pinhole or floor tile. Admittedly we do like to try and control stains when they do come to our attention or are deemed to need tidying up.

I admit to offending the artwork with my body, and being offended by the artwork. We have made excellent progress towards the wish-accident. Martyn writes:

“I am interested in the relationship between my colour sampling activity and the way that plein air painters approached colour within the environment/landscape. The values attached to landscape painting (at that time) was as an activity also related to meditation and or leisurely ways of being...”

In the gallery space itself the large Enjoy windows exhibited  a mild rash of water and glaze colour patches. The aesthetic quality was litmus-like. The autonomy of this aesthetic to stand alongside my impression that something underhand was going on was most startling. Though the window itself seemed a less dynamic challenge to what it might mean to fall back on old adages like the body, painting, alchemy and science, there was something crucial in the relation of the window’s vapidity and the stairwell’s veracity of openness—of technique, of interpretation, of process.

The work showed me explicit hopes, lodged between the work, those who I talked with about the work, and later on my own body and my musings about the work’s prismatic activities

Let us not forget about the air. Air dries paint, carries dirt, and lets ideas take up space and time. Raewyn Martyn’s wish-accident, that aspect of the show that was speechless but profound in its limits, was to me tied to acknowledging the air in things. Not only the light so prized in painting, or the viewers warbling body so prized in conceptual minimalism, but how we qualify and broadcast the desire to dream, and be dreamed of, here and in the future

Close you eyes and wish-accident.

Raewyn Martyn’s practice sees her specialise in the words ‘wish’ and ‘accident’ and how they might form a plentiful alliance.