Within you without you 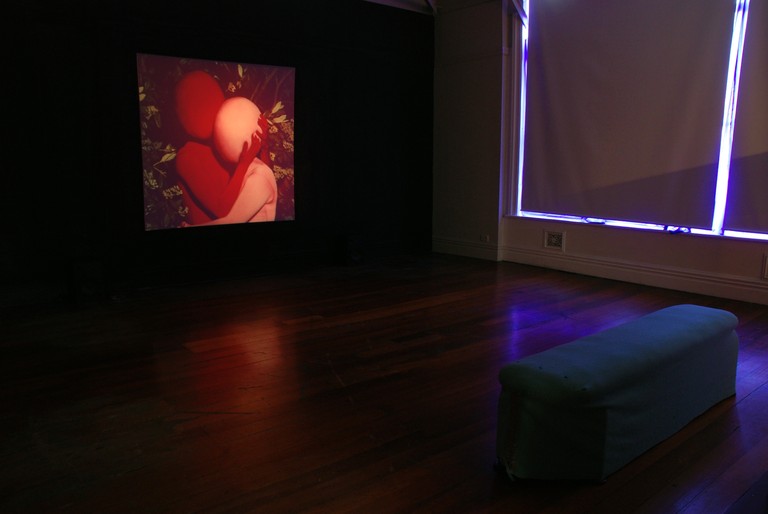 Louise Clifton’s installation It’s a wonderful tonight transformed Enjoy into an ambient netherworld. Consisting of a projected image, a night-time soundtrack and soft furnishing, daylight was filtered into the gallery through a sheer curtain, creating a warm interior of after-dark.

The installation continued a theme Clifton had begun previously in a series of highly stylised photo- graphic portraits based on a red suited human figure. A kind of modernist ideal, Red Figure was clad head to toe in a primary-red lycra body suit. While the character was recognisably human, the lycra stretched over its head and facial features served to render the person anonymous. In these earlier works, sometimes Red Figure sat behind the wheel of a brand new car, leaning forward in anticipation of great speed and perhaps the sensation of becoming one with the machine; in another image the figure’s body almost merged with a piece of ergonomically designed red plastic furniture.

Both of these images combined an overwhelming sense of style with a sense of sci-fi futurism that was so banal it bordered on hysteria. Clifton herself describes the red man as a model of“stylistically fanatical design, living in an idealised world of consumer goods. He comes home late at night to his white apart- ment and feels lost and frustrated—for no reason at all.”

It’s a wonderful tonight continued Clifton’s theme of the loss of the individual self but forsook all references to materialism in favour of the strictly personal.

The central focus in the installation was the projected still image of the same name as the exhibition which consisted of two figures in a tender embrace, their features both familiar and disturbingly foreign. Where some of Clifton’s previous creations showed evidence of noses, ears, eyes and other facial features, the heads of the figures in It’s a wonderful tonight were replaced with soft, swollen featureless pods. Seen from the waist up, the characters were dressed in muted luminescent red and pink one-piece outfits covering their entire body including head, hands and fingers. They embraced against a background of night-time foliage whose green-black leaves framed the couple in the inky depths of night.

At a certain point the image seemed to oscillate between a portrait of comfort and distress. As the Red Figure clasped the pink figure, its fingers pressed into the head of its beloved objet d’amour. Red Figure leaned slightly back towards the foliage as if to pull Pink into obliteration, while Pink remained still and fixed in the centre of the frame. Frozen in blinding absorption, the embrace which initially seemed tender became a kind of cruel dependence. 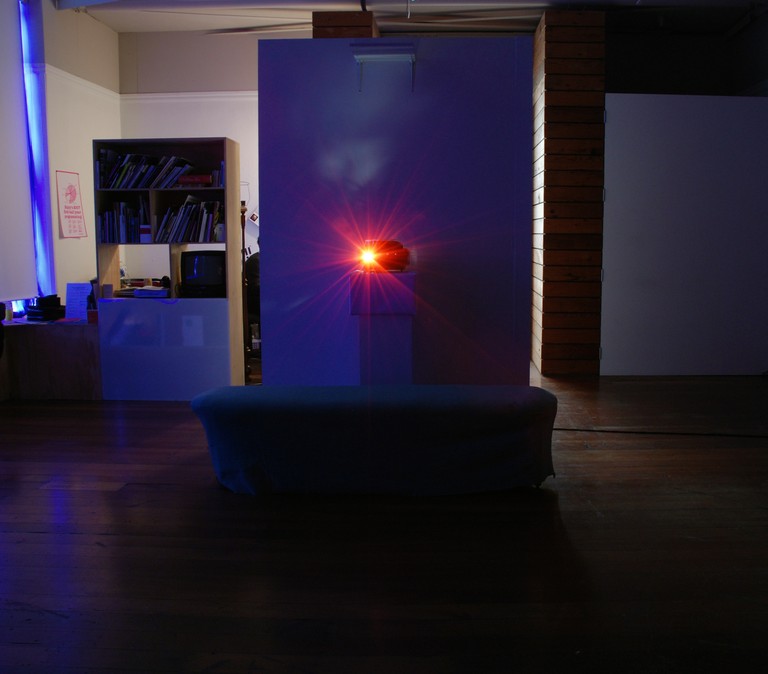 A soundtrack of night-time ambience filled the gallery. Composed of muffled wind gently blowing and cicadas chirping and fizzing, the soundtrack was key factor in gently oscillating the image, suggesting a possibility that the image would in fact change over time and magnifying its possibilities. Are It’s a wonderful tonight’s lycra lovers gently breathing? Are they falling into the shrubbery? Are the leaves sprouting benignly or slowly pulling their prey within? Will the fingers pressing into the head of pink figure continue to press until they puncture the skull?

Along one wall Clifton hung sheeny curtain fabric that softly filtered the daylight into methylated purple. Here also time was a factor in perception as the hours passed from bright morning to late afternoon.

The final object in the room was a soft-seated bench which sat against the back wall opposite the projection. After sight and sound, the seat added a third sense—touch—to the exhibition. Covered in green stretch fabric which reached to the floor, it also seemed to suggest it had sprouted (in)organically from the floorboards. Alternatively, perhaps it was a live creature which had walked in to the gallery and sat down patiently for the two and a half weeks of the exhibition? Despite the dark possibilities of the work, the bench was almost a bizarre touch of comedy. Meanwhile, the clunky title It’s a wonderful tonight evoked a Lynch-ian weirdness that offset the drama and kept the work within the realms of the imagination. Perhaps the title also hinted at an exit strategy for the two figures, an awareness beyond the world of two figures absorbed into one. Of the two, Pink seems to have the most recourse to a sense of self, with a seam visibly connecting the arm to the body and two pieces of fabric that make up the body suit.

In talking about the work, Clifton cited the influence of Japanese artist Yayoi Kusama, whose paintings, sculptures and performances evoke an uneasy tension between imagination and reality.

In Kusama’s Infinity Mirror Room (Phalli’s Field) (1985) the artist lies in a red lycra body suit amongst a field of what appear to be white soft toys covered in red polka dots. The central figure lies in pose of silent suffering, eyes and mouth closed and face fixed as if facing an internal vision of her enveloping surroundings.

Where Kusama’s work is a foreground statement of mental anguish, It’s a wonderful tonight is altogether more stealthy, with all of its elements of light and show flexing over time to reveal their inner and outer terrors.

With a series of portraits leading up to this work it is tempting to speculate on the imaginative possibilities for Clifton’s red and pink figures. With the intimation of movement located in It’s a wonderful tonight itself, perhaps the moment of change is even closer. Will they merge into each other to become one or return to themselves?