Words, and the lack of them 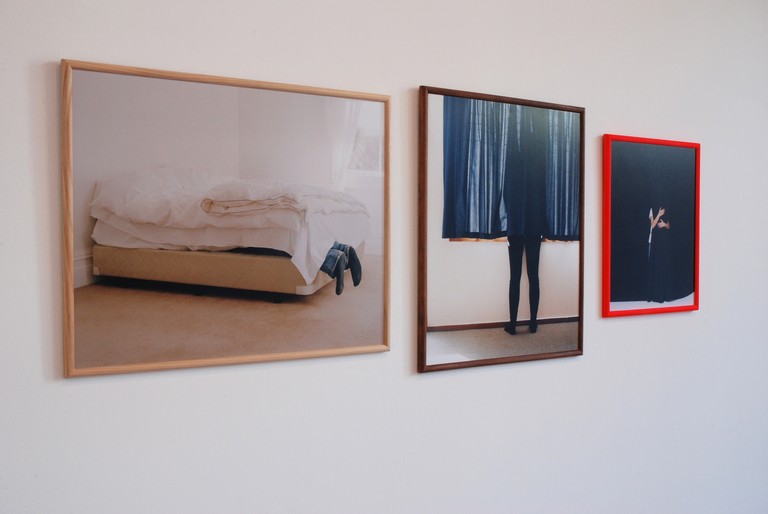 Enjoy's free-standing dividing wall has been moved around several times since its introduction in 2005. Inthis instance it sits directly in front of the entrance to the gallery -blank and concealing the space from first glance. Upon walking aroond the wall, the first thing that strikes me about Layla Rudneva­ Mackay's Your words in my mind become mine. Your words are mine now is its silence. Not the usual silence that comes with visiting a gallery mid-week, rather the works themselves emanate silence. The gallery is all but empty, sparsely decorated with seven framed photographs that Jl.oat on the walls that host them.

Each of the images could easily be called portraits, although in this case it would seem as ifthe seven solitary subjects are unknowing or indifferent to the fact of their portrayal. They don't look at the camera, but rather their faces are either turned away from the lens or concealed with fabric, their identities a mystery. The images are attractive, beautiful, and appear to be carefully composed. They echo the 'too cool to care' incidentally hip style of fashion magazines. Considering their styling, it is peculiar then that they are confined to such an onusual format. At roughly A2, they sit somewhere between the indulgent bill­ board size images in the work of artists such as Sam Taylor-Wood and the A4 fashion-shoot spread of glossy magazines.

Living in a small South Island farming town as a child in the 1980s, Rudneva-Mckay encountered this format in the generic family portraits hung in pride-of-place above the fireplaces of rich orchardist fami­ lies. Portraits in this style tended to conform to the illusion of a picture perfect family but, by the nature of their generic formula, were doomed never to succeed as true representations of the nuances of fumily groups. Although the reference to the family portrait is not immediately apparent in this exhibition, an awareness of its relevance seems to further reinforce Rudneva-Mckay' s emphasis on the isolation of her subjects. The stark contrast between the image of the family group and that of the individual conjures feel­ ings ofloneliness and depression, the feeling of not belonging -which may indeed be one of the realities that is glossed over by the formulaic family portrait.

The exhibition text notes that the title is "derived from a list of the artist's thoughts in the form of poetic fragments or short works, suggesting a delicate connection between the worlds of both visual and written poetry". Rudneva-Mckay herself has spoken openly about her struggle with the world of words through­ out her educational career and it is perhaps this experience that has resulted in an exhibition with such a lengthy title. 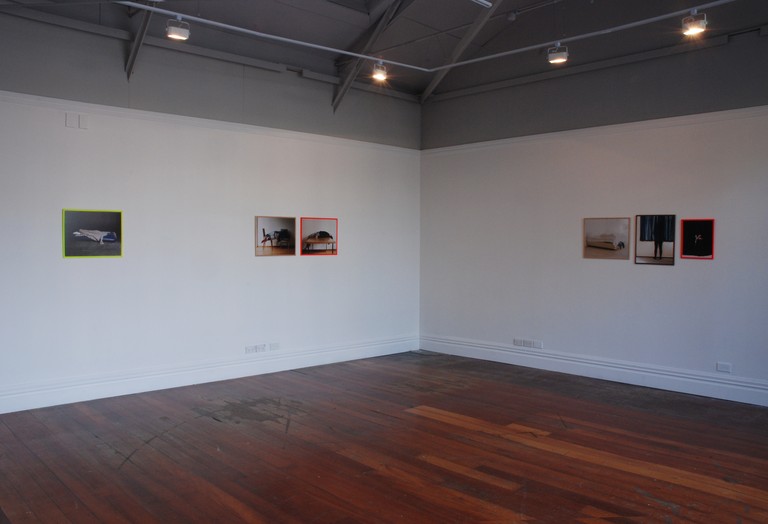 In the artist's words:

"I try to project what comes from within, the stories in my mind. The stories that come while photographing, come from the person, the environment ...This title talks about talking or more greatly listening. Listening is the way I learn. I want to acknowledge how important people and conversations are to me."

Here, however,is a group of images whose titles are verbose andyet whose subjects seem so silent, so void of words.

Rudneva-Mckay's approach to installation follows the popular method of hanging works at eye level. Two of the works are hung in isolation, while the remaining five images are placed in two distinct groupings: a pair and trio I find Rudneva-McKay's decision to group the works, the how and why of her approach, curious; the subjects of each image are depicted in isolation, so why bring them into groups in their static format? By ordering some of the images, various categories of being are suggested,such as indoors/out­ doors, awake/asleep, hidden/exposed. In addition to this, a theme of purposeful interactions between the human body and fabric and furniture items is carried strongly throughout allbut one of the images. 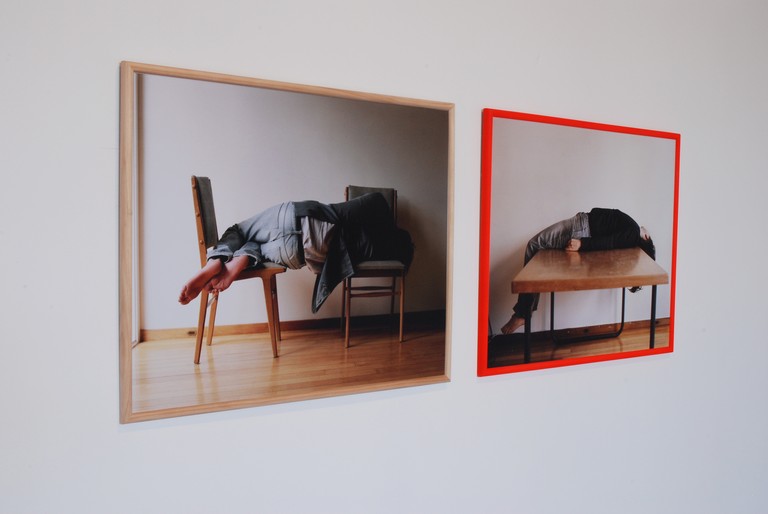 If isolation is a theme throughout these works, then one image, that of the figure contained inthe garish fluorescent orange frame, is the most isolated. A single androgynous figure stands centre-frame with its back to the camera. Bending slightly forward, hands on knees,it appears decapitated. It sits apart from the other images physically, formally and thematically. Located alone on the gallery's movable wall it is physi­cally disconnected from the other images. Formally, all the other images feel strongly connected by their staged, studio-lit resolution, yet this image is at first hard to discern (taken outdoors without a flash or lighting to aid it). It seems the most impromptu of the works -I cannot decide whether the figure's pose implies s/he is stretching, inspecting, resting or regurgitating. Thematically this image is removed from the others, as while the rest demonstrate some kind of engagement with fabric or furniture, this one does neither -creating an element of confilct in an otherwise consistent set of images.

The use of loud fluroescent-coloured frames on four of the photographs adds further confilct to an other­ wise quiet show. Rudneva-Mckay's intention with these frames was to "guide [the viewer] to focus [their] attention." By containing the quiet, small and coloured photographs, she attempts to stop the image/ narrative from spilling into the room, effectively creating a "window". The images are so serene, still and peaceful that the injection of these bright colours creates a visual and conceptual conflict that complicates an otherwise straight-forward comment on isolation. Fluorescent colours are something that I strongly associate with eighties kitsch (a category that the family portrait may also fit into) so perhaps there is a subtle connection between these two references. Without inside knowledge, however, this connection may be missed by the viewer.

When interviewed about Your words...,Rudneva-Mckay revealed that her aim was to stress "a need for privacy". However if these images capture private moments -as intended -then by exposing these im­plied private moments, the artist is forcing the viewer into a state of unintentional voyeurism. I felt as if I was spying on the subjects, which made me feel a little uneasy. but also suggested that the aforementioned "need for privacy" is not so easy to come by. In the age of surveillance, privacy is increasingly contested ground, and the communication ofit even more so.

3. When we finished taking the photographs.  He reminds me, when bridge building we need to support the middle.

4. Dis ap point ed.
I search I search
I long
I call out
to you
you
who lives
are you clear
can you see
can
you see
what I can't
I wonder what
you can see
I wonder what
you
know
I wonder how
you feel
your door
is locked
I stand outside
I pace
I look at you
through
frosted glass
Inside
looks light
light looks clearly
language loses
the wash
of the water
let land be
lacked
be lacked
be lapped
its late
be lost
Its constant
thought pushes
hard
against one
separating
losing form
lost land
lost language.

5. Taking a moment to lose himself, when found most unexpectedly squashed between a mattress and its base.

6.  Feeling dizzy, our brief is to decide, while trapped between the windowpane and the curtain.