“From a distance it smells of honey like the others, and bees fly in and out in the same way. But one has only to observe that hive to realize that there is no longer any life in it. The bees do not fly in the same way, the smell and the sound that meet the beekeeper are not the same. To the beekeeper’s tap on the wall of the sick hive, instead of the former instant unanimous humming of tens of thousands of bees with their abdomens threateningly compressed, and producing by the rapid vibration of their wings an aerial living sound, the only reply is a disconnected buzzing from different parts of the deserted hive. From the alighting board, instead of the former spirituous fragrant smell of honey and venom, and the warm whiffs of crowded life, comes an odor of emptiness and decay mingling with the smell of honey. There are no longer sentinels sounding the alarm with their abdomens raised, and ready to die in defense of the hive.”

Honeybees, those small winged creatures that we rely on not only for honey, but also pollination of almost half the worlds leading crops have been mysteriously disappearing since late 2006.1 Bees Forever, an installation at Enjoy Gallery by Catherine Caudwell, Deb Tuckey and Samantha Wallis, transports the viewer into the future, where it has become necessary to scientifically create these crucial insects. The window of the gallery remains boarded up with cardboard, from where the delivery of the brand new kit set pollen farm has arrived. Its components not yet released from the giant wooden crates that brought them there.

Two structures are presented, one open and one closed. The queen bee sits within a transparent crate, exposed and very much part of the viewers current visual surroundings, the here and now (albeit in the future). Parallels can be seen with the display case of a museum, hinting at the possibility of impending extinction. In contrast the pollen field crate is completely solid, only able to be viewed through a small hole, like a childhood diorama. The crate acts as a portal, transporting the viewer back to their youth, and simultaneously projecting them forwards into the future to a time where bees have become extinct and pollen farms are all man-made. The contrast becomes evident, as nature is fused with more artificial elements and becomes repackaged as a commodity.

An industrial, factory-like approach has been taken with the words stamped on the side of the crates.

INSTRUCTIONS:
1. PLACE WHERE FIELD IS TO FLOURISH
2. REMOVE ALL SIDES
3. SET UP COMPONENTS

It appears that pollination can no longer occur randomly. As is often the case, humans have sought solutions for emergency situations by turning to technology and business. It will become available only to those who can afford it, the queen bees of the human race. 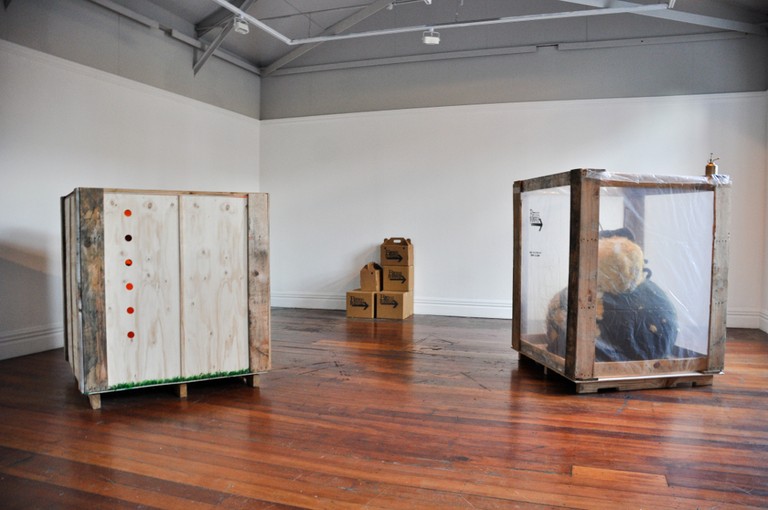 The queen bee herself prompts conflicting feelings in the viewer. She is extremely soft and tactile, eliciting memory of childhood toys, and encourages the unusual feeling of wanting to reach out and touch this creature one would normally avoid. Overly large, the queen bee is a caricature, presented as real but obviously and distinctly artificial. This visual degree of separation from a ‘real’ queen bee enables the viewer to feel positive towards it – any truer to the original and an “uncanny valley” situation could arise, where the subjects flaws are illuminated in its attempt to be realistic, and an inherent disgust occurs in the viewer.2 The bee, through its sheer cuddly, gigantically scaled ridiculousness, has been purpose-built to appeal to the consumer.

In a similar way, the pollen farm contains real plants that have been painted to look like imitations, a reference to the painted roses in Alice in Wonderland, an elaboration of the convergence of fact and fiction. A glossy pamphlet containing an old style fable accompanies the kit. The fable makes suggestions of witchcraft as to blame for the death of bees, as if we had not only found ourselves in the future, but in a parallel universe that split off from our own 400 years ago; where ideas, and superstitions, and magic did not completely bow their heads to the rules of science, but have instead continued to exist concurrently. Witchcraft has provided the reason for Colony Collapse Disorder, and science has fixed the problem.

Knowledge, however, is not fixed, it is not stationary, it is not an immovable pillar. Humans have believed many things in the past that were later found to be untrue. “What everybody knows is true turns out to be what some people used to think”, wrote Ursula LeGuin.3 Things can be read as evidence, things that are entirely unconnected – correlation does not necessarily imply causation. From the beginning of the 14th century, through to the 19th, a “little ice age” was experienced. These lower temperatures were blamed on witchcraft, the cold spells inciting more witchcraft  trials. Malleus Malleficarum, often considered as a seminal text of witchcraft, published in 1484, contains a chapter titled “How they Raise and Stir up Hailstorms and Tempests, and Cause Lightning to Blast both Men and Beasts.” This chapter ends with the line, “Therefore it is reasonable to conclude that, just as easily as they raise hailstorms, so can they cause lightning and storms at sea; and so no doubt at all remains on these points.”4 An incredible error in knowledge and understanding, any further thought on the matter was consequently denied with the words “no doubt at all remains.” The act of publishing further verifies such texts within the canon of ‘verified’ knowledge, and highlights the dangers of accepting facts and figures as gospel without further questioning.

It is an essentially human trait, to blame and point the finger away from oneself, particularly in times of crisis. Higher recorded numbers of lynchings in the American south during the late 19th century to the early 20th century have been associated with economic downturn,5 and poor economic conditions are frequently linked with increased civil conflict, as one group is quick to scapegoat the ‘other’ for the deterioration.6

The act of blame is a way to channel anger and emotion, to absolve oneself of responsibility and avoid consequences. It can also provide a method of dealing with the situation, an answer provided to a perplexing question. Whether or not it is the right answer to the question is another matter, but the finding of a perceived solution is often enough to soothe the mind. If the adverse weather and crop failure are due to witches, then the problem can be fixed by humans. If the adverse weather and crop failure are out of the scope of human reach, then people have no control over their situation and are powerless to change it.

The cause of Colony Collapse Disorder is currently unknown. Many theories have been proposed but the only certainty is that bees are rapidly vanishing and the environmental impact will be vast. In Bees Forever, where fact is the problem, a fictional approach has offered a solution.