Welcomed by a friendly member of the Enjoy Gallery staff and directed towards the inconspicuous ‘cleaning cupboard’ you are asked to peer through a keyhole. What do you see? A split screen; one child, two parents. The child sheepishly walks up to the adult and admits something to them, unknown to you (the keyhole spy), and is then picked up into a warm embrace and lifted into the lap of each parent. You watch as both whisper in the child’s ear; left only to imagine what was admitted and what the parent said in response. You are the keyhole viewer and although you can sneak around and look, you are confronted with the knowledge that you will never quite understand the private world of another being. 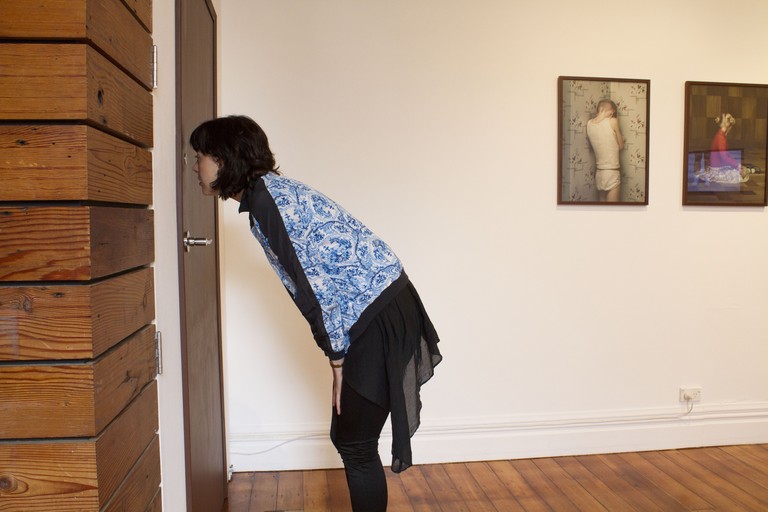 Through The Keyhole is a film and photographic exhibition at Enjoy Gallery, August – September 2013. It showcases work from leading contemporary Dutch photographer Erwin Olaf, Auckland artist Edith Amituanai and Wellington-based artist Claire Harris. The works visually explore the semantics of guilt and shame and the show investigates how the two emotions are both parallel and conflicting.

Beginning the show’s experience by bending down and looking through a keyhole for Olaf’s short video Keyhole Woman, 2012 sets the mood. The exquisitely captured photographs of his series Keyhole primarily explore guilt as an internalized feeling, singular and private. Each of the images shows just one person in the frame and all of the subjects embody a pose resonant of guilt. The models are turned away from the eye of the camera in belittled poses. After spying through the keyhole and wondering what was said between the parent and the child the audience is left with more unanswered questions about each of the people in the photographs. Olaf encourages natural curiosity through his film and images but in the same sense fends off any advancement into the realm of shame by cutting each story short. The viewer is always left to make his or her own conclusions about what caused the individual’s guilt. The secret locked in each image is only as scandalous as the viewer imagines it to be. 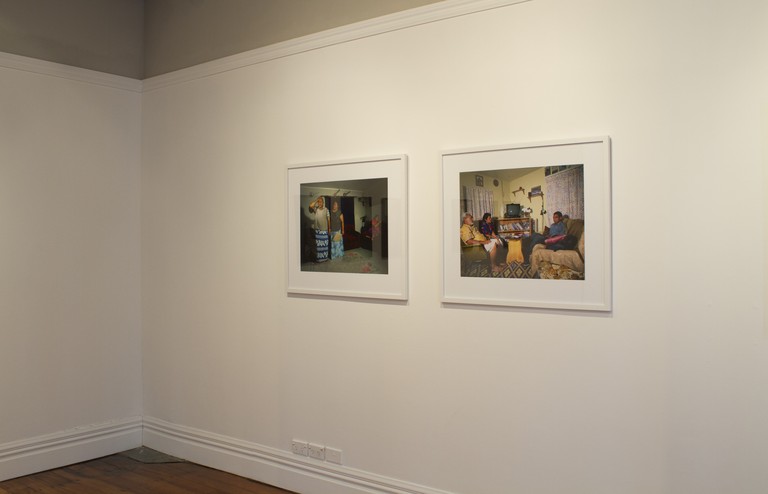 Your journey on the path of shame and guilt now leaves you standing in front of a screen mounted on a large hanging white panel that divides the space diagonally. Before you, you see a cropped image of a persons legs, but only from the knees down. You stand and watch as the word ‘small’ begins to carve itself down the left shin. Once completed, the blood from the incisions is left to trickle down towards the white-socked feet. ‘Town’ is then carved down the second leg, leaving the crude markings of ‘small town’ seeping blood. The film is raw; in it’s production, it’s imagery and its meaning. You are from a small town and immediately resonate with the imagery. Feelings of confinement flood through you, yet it is blended within an open space. A small town is the ultimate place for personal invasion, six degrees of separation is more like one degree. You remember that wherever you went there was no where to hide, someone always saw you, and was ready to point out that what you were doing was inadequate in some way. You will never live up to the prospects a small town lathers on you. Even if you, just for a second, meet just one of their expectations they will reward you by cutting your poppy down to the ground.

Harris’s video Big Hell, 2013 is perhaps the least immediately understood piece within the show. It talks about the associations of being from a small town and is therefore more relatable to those who have been raised in this environment. The piece requires the audience to not only understand the underground workings of small town politics but also have the ability to step back and realize the sometimes destructive cultures within them. Big Hell evokes a sense of hyper-awareness, a paranoia of being watched that close-knit communities exude. Small towns are similar to political parties, the smaller the population the more closely aligned the vision of that community. For the younger generation, growing up in this environment can be suffocating. Small towns often take away a persons ability to explore and develop in ways that don’t necessarily fit into the towns set ideologies. Harris explains her choice of using self-harm to express her feelings about small towns by saying:

“deliberate self harm can seek an audience to render pain into noble suffering, while hoping to avoid the shame of vocalising unacknowledged discontents in an environment where those very discontents are seen as shameful”

Self-harm is a closet topic, and is therefore the perfect medium for the expression of Harris’s thoughts of small town ideology. The work is an exploration of shame being used as an imposing tool, but also as a tool for expression.

You move around the screen to the three photographs displayed on the far wall of the gallery. These images give more context for the feelings of the subjects through a fly on the wall perspective, and satisfy your curiosity to a greater extent then the photographs from Keyhole, 2012. Amituanai’s first image, Boy Shame, 2003, shows a Samoan family in a lounge setting with two parents on one couch and a boy on the other. The parents look disappointed, staring at their child for an explanation, searching for a satisfying response from him. You move to the next image, Girl Shame, 2003, showing a similar situation except the child is a girl. The atmosphere seems darker though, the standing parents are in a more hysterical pose; deep shame emanates from all three subjects. The third image you can see is different, it displays a cropped social setting, a hall or church. This image gives more limited context but focuses in again on three subjects. Two girls in the background, one whispering into the others ear, and another girl sheepishly sitting in the foreground. The title says it all: FAITALA, 2004, Samoan for gossip.

Amituanai closely explores the notion of shame in an intimate shared environment. The artist enters the homes of Samoan families living in New Zealand and examines the roles of guilt and shame from both the imposer and the victim. In each image Amituanai captures the essence of three subjects in a moment of heightened tension, the atmosphere is framed beautifully in each. A sense of the communication taking place in her work is very much visually present. Shame is only felt with the presence of an audience, and here both the audience and the shamed victim are explicitly exposed. Amituanai provides the viewer with more of a story behind the situation that has caused the feeling of shame. Unlike Olaf, Amituanai captures her subjects from a knowing observer’s perspective, rather then making the audience feel like they are seeing something they shouldn’t. Amituanai explores notions of pressure and how this can take its toll on younger generations. She also engages with the role that gender plays and critically examines how guilt and shame can trigger different responses depending on the subject. 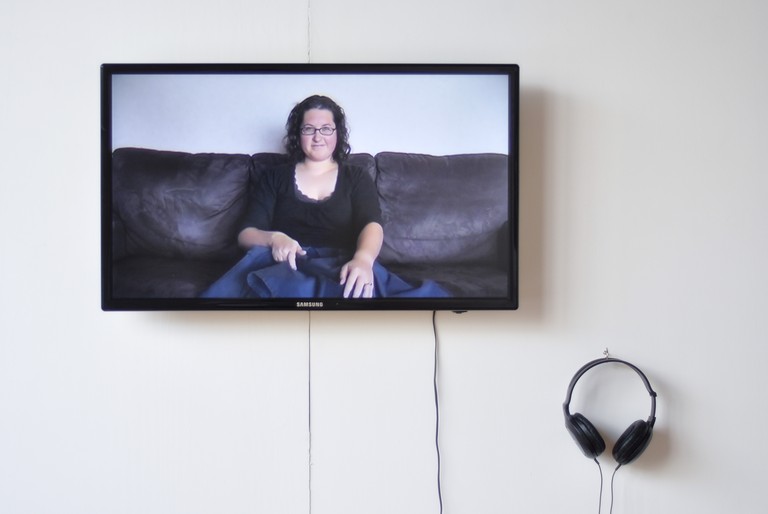 The final piece in the exhibition is a video featuring Claire Harris herself. Nicholas Girls (2010), is the only piece that uses audio, so you put on the headphones and begin to watch as a shy vulnerable girl stares back at you. You hear laughter, but not the type that is light and happy but sounds of ridicule. You have been held as the observer throughout this exhibition, the fly on the wall watching snippets of situations. This performance is no different, you look as the girl grows increasingly uncomfortable in her own skin to the tune of this mocking laughter. Just as you start to feel empathy, the video switches to a different scene. This time she asks if you would like to hear a joke, ‘Knock Knock…who’s there?... Nicholas… Nicholas who?... Nicholas girls shouldn’t climb trees’. You laugh, as you visualize the joke. Distracted by this thought you think that’s the end of the video as the scene fades out. But wait, she’s back again! You think she might just tell another joke (well she does in a sense). You watch as the camera angle zooms out to now reveal a full-length shot of the artist. She begins lifting her skirt up over her knees, you start feeling uncomfortable but convince yourself she’s not going to do it. The whole time she stares at you and just at the last moment she launches herself forward at you exposing herself for you and…wait is there anyone behind you!? Did anyone else see you watching that?? You look around anxiously praying that you are alone in the gallery. As you turn back to the screen you get a quick flash of the full Monty once again and the artist returns to her seat. This time though she is the one with the menacing grin on her face!

Feel that? It's called shame, it is everything that you have been observing dumped right on top of you in a flash. Funny how quickly everything can turn on you isn’t it? Who’s looking through the keyhole at you now?