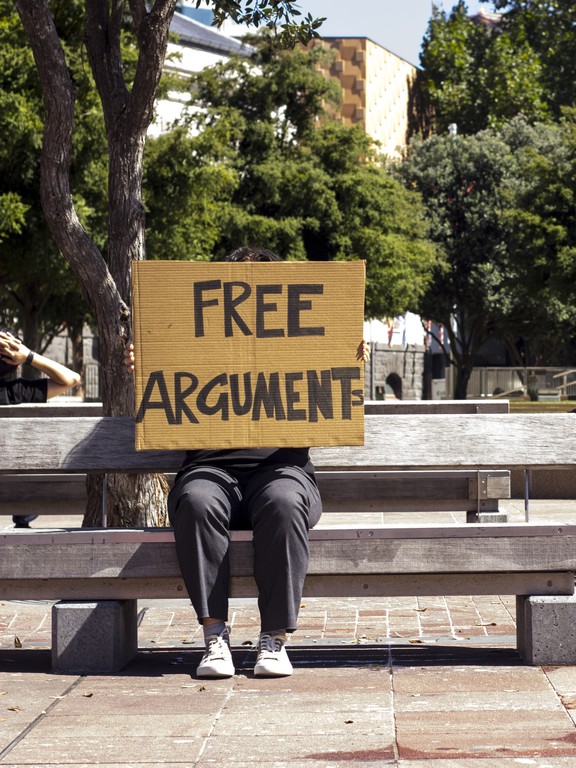 Instruction: To argue freely in a public place.

Conditions: Public place, late summer, cardboard sign “Free Arguments”, members of the public and the “Trading and Events in Public Places Bylaw 2015”, which states that a person must hold an approval issued by the Auckland City Council when undertaking to carry out an event or when trading in public places.


Description: To practise social dissensus in a public place.


Action: Today I plan to take my first and tentative steps to engage in free arguments with any passers-by in a public place—Aotea Square in central Auckland. It’s a Thursday and I am dressed for the city, with a greeny-grey long-sleeved top, dress trousers and comfortable shoes. I am seated on a wooden bench bordering the southern side and looking out onto the square. Directly in front, about fifty metres away, is a large cinema complex. I notice a constant stream of people walking along the northern perimeter in front of the complex, some are focused and walk with purpose, others dawdle and every now and then a brave and possibly time-poor pedestrian chooses to gain ground by cutting directly across the square. My plan is to argue, freely, but for the twenty minutes I am sitting holding my sign, no one stops to take up this free offer. Maybe it’s because I am on the less populated side of the square and hiding behind a homemade cardboard sign? Or, as one young man comments as I walk away, “aren’t arguments free anyway?”1 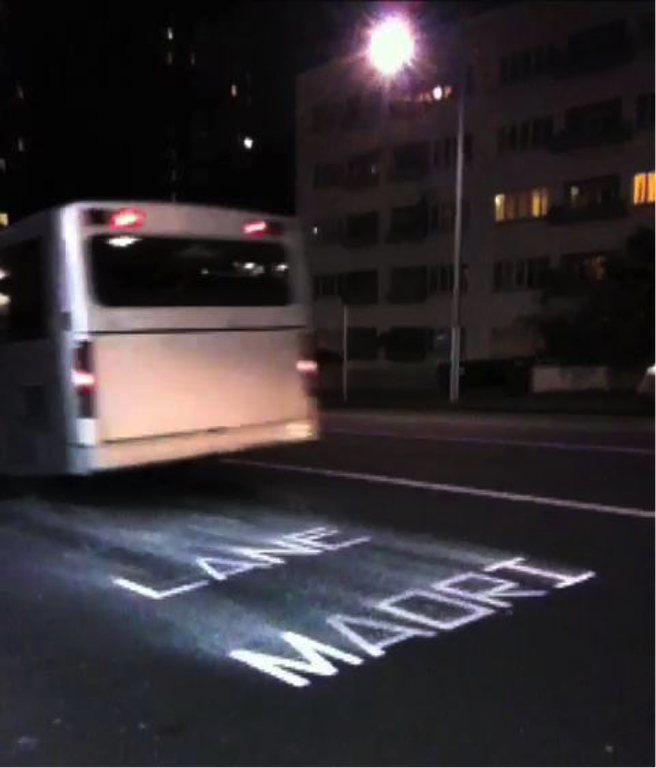 Instruction: To make a special lane for Māori.

Conditions: Cardboard stencil “MAORI LANE”, white chalk, bus lane, s 4(1) “Summary Offences Act 1981” which states that, “every person is liable to a fine not exceeding $1,000 who, (a) in or within view of any public place, behaves in an offensive or disorderly manner.”

Description: To create a special lane for Māori in the bus lane on a central Auckland street in order to open up for discussion the issue of legal rights relating to the ownership of fresh water in Aotearoa New Zealand today.

Action: I am standing on the footpath a couple of steps away from the road. I am wearing a light grey hooded jacket over a dark blue t-shirt, jeans and a pair of comfortable, worn sneakers. I have an iPhone taped to my chest that is partially hidden by the hooded jacket. There are a few people around, heading up and down the street or stopping for a bite to eat at one of the fast food restaurants close by. I am waiting for the traffic lights up the road to turn red and for there to be a break in the traffic coming down the street.

Using the BUS LANE sign painted on the road ahead as my guide, I work my way through each cardboard letter in “MAORI”. Taping a stencilled letter to the ground I quickly fill in the blank cut-out with white chalk, rip it off, then return to my pile of letters and extra chalk on the footpath. I have just finished the letter A in LANE, when a man walking past stops to ask what I am doing. He says he has been watching from down the road and is curious. I tell him I am creating a special lane for Māori and that I am interested in the question of fresh water rights as they relate to the Treaty of Waitangi and how as a nation we might engage in discussion about future quality, access and management of this resource. He tells me he is studying towards a business degree.

We notice a young man, possibly under the influence of alcohol, stagger past to sit on a chair on the footpath outside one of the restaurants. He doesn’t appear to be interested in what I am doing, nor is he intent on buying any fast food. After a short recharge he gets up and continues to weave his way up the street.

Not long after this, a police car arrives and parks directly over MAORI LA. I direct my camera at the road (and police car) in order to record this moment, at the same time resisting a strong desire to quietly back away, out of sight. But I soon realise it isn’t me they are interested in as they speak with the restaurant staff, get back into their patrol car and head off in the same direction as the young man. Anxious to finish in case the police officers return, I say goodbye to my footpath companion and with just two letters remaining, I quickly colour in the N and the E before another vehicle arrives.

Layne Waerea (Te Arawa, Ngāti Kahungunu) is an artist and educator living in Auckland. Utilising her previous experience as a lawyer, Waerea considers how socio-legal performance, as a series of art interventions in public spaces, might operate to question and critique social and legal rules governing preferred behaviours in the public realm. Her practice draws on the Treaty of Waitangi (1840), as Aotearoa New Zealand’s only living treaty with Māori, and how the Treaty’s ongoing performance can foster cultural/political conversation and counter-spaces that question/challenge the nature of ownership of natural resources in Aotearoa New Zealand.

Recent projects include the chasing fog club (Est. 2014), different ways to harvest rainwater and a free instructional video on how to catch air. She completed her doctorate at AUT University in 2016.