Who’s missing and how can we reach them?

In performance art, the body becomes the medium and is often the subject of the work. For people of colour, Indigenous, or minority artists, performance art can be used as a device to insert their bodies into spaces that don’t adequately or accurately represent them—allowing them to represent themselves in the art industry.1 Performance art has always aimed to build connections between artists and audiences, and by being present in largely Eurocentric art spaces POC artists can address cultural misrepresentations in art and within a larger social context. This can allow for a change in response to the medium from wider audiences—from a state of alienation to a feeling of inclusion or recognition in a space that does not regularly represent “othered” cultures. It offers audience members the opportunity to see POC in a place of status in those spaces.

The terms “body art” or “performance art” that emerged in the 1960s often evoke images of Marina Ambramovic and Ulay’s Relation in Space (1976), Chris Burden’s Shoot (1971), or Carolee Schneemann’s Up to and Including her Limits (1973–1976). All of these works incorporate an element of obscene human behaviour and confronting bodily movement. It is not common to witness two nude people run towards each other—the front of their bodies forcefully colliding2—or be voluntarily shot in the arm by a friend,3 or be naked, suspended by a harness and swinging from a rope to draw with crayon on the surrounding walls.4 Given, these are examples of performance art that focus on pushing the body to its limits and my selection does not incorporate the many varied facets of the medium. These artists used their bodies in a confrontational manner, provoking discomfort from audiences, and they have since become some of the most popular and canonised examples of performance work. Futher, they engage in both visual and verbal languages that only a privileged few are familiar with—people who have had arts education or those who regularly engage in contemporary art discourse.5 Surveying performance art, many of the most well-known performance artists that have been canonised, collected, and exhibited are predominantly white artists, often feminist, who made their seminal works in the 1970s. Largely absent are minority groups and POC. Though works that aim to confront and provoke in abject ways are still created and exhibited, performance art practice has expanded to include works that use varying degrees of exhibitionism and artists with more varied backgrounds. As the number of performance art practitioners has grown, the audiences of performance art have shifted and there is arguably a more accessible dialogue surrounding the medium. In Aotearoa we have a thriving group of performance artists—many of whom are of Polynesian and Māori descent—who create works to better represent their communities and make more space for themselves in the process.

As a Sri Lankan New Zealander, I do not see an adequate amount of contemporary performance artists from my culture represented and working in the art industry. As a colonised and Eurocentric country, non-white cultures in Aotearoa are constantly under-represented or misrepresented in our art institutions. This is reflected in the regular exhibition of culturally appropriated work—art that exoticises “othered” cultures and perpetuates cultural stereotypes. These are just a few of the art industry’s failings in the field of cultural representation. In contemporary art spaces, audiences do not include many members of our or “othered” communities, so work that speaks to our communities is likely to be viewed through a Eurocentric lens.6 Many audience members may come into those spaces not knowing much or anything about the culture represented. As practitioners, it is important not to reiterate any harmful stereotypes that are already placed upon a community or culture. Performance art can be used as a form of self-representation and has the ability to challenge these stereotypes.

In 2016 Walters Prize nominee Kalisolaite ‘Uhila enacted the durational performance work Maumau-taimi at ST PAUL St Gallery, the title of which in English can mean both “wasting time” and “the gift of time”. For this work, ‘Uhila situated himself in the front window of the gallery, sitting down and waiting for audience members to sit with him and engage in conversation. There is an obvious comparison to be made with Abramovic’s The Artist is Present, a performative work based at MoMA in the midst of her retrospective that took up the majority of the gallery in 2010.7 The work consisted of Abramovic sitting on one side of a small wooden table opposite an empty chair in a long vibrant red dress. The audience was encouraged to sit in the chair opposite the artist and silently make eye contact with her. The performance lasted eight hours per day for nearly three months and the artist drew in large crowds—utilising the phenomena of “artist as celebrity” to dramatise the simple interaction of silent eye contact. 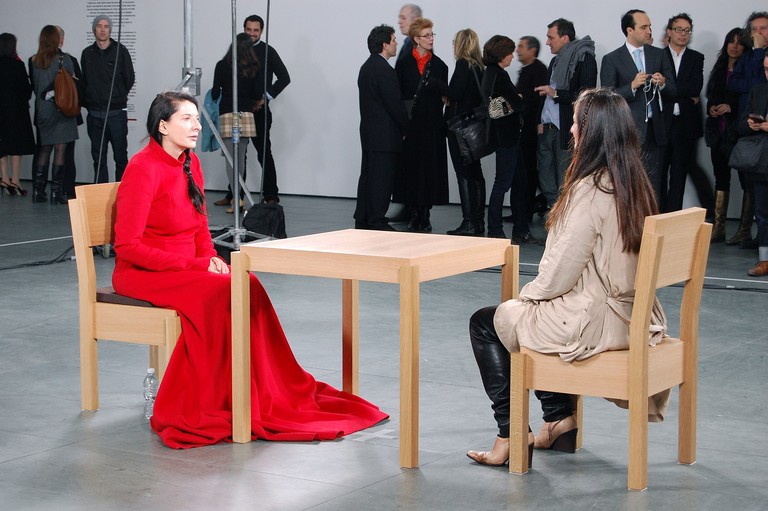 Stillness is not uncommon in gallery spaces; galleries are full of carefully installed objects deemed precious and valuable. That status prompts audience members not to touch the works, as even works that are intended to be interactive are sometimes approached with trepidation. Generally speaking, gallery minders, hosts, and security guards all stand silently, observing the works and how the audience interacts with them. It is uncommon for the artist to be present in the space (aside from openings), to be seemingly idle and put on display.

Despite the performative similarities in the work of Abramovic and ‘Uhila, the content, scale, and impact of these two works differ greatly. ‘Uhila’s work compares the value of time in Tongan culture to the value of time within a Eurocentric New Zealand culture.8 The gesture of sitting in the gallery window, visible to the public, prompts audience members to assume that the artist is idle and “wasting time”. This is the very assumption that the artist challenges. Speaking to the lack of support he receives from his wider family, ‘Uhila acknowledges that contemporary art is not seen as a common practice or career path—it is perceived as a “waste of time”.9 ‘Uhila’s comprehensive body of performance art allows this idea to be challenged. As his body is closely tied to Polynesian masculinity, he carries the assumption that his body needs to be active, strong, and powerful. His stillness in Maumau-taimi challenges these understandings, focusing on his characteristics that are contemplative and vulnerable.10 Like many POC in New Zealand, ‘Uhila comes from a working-class background and occupies roles that are entirely distant from art to generate income.11 This, in conjunction with the often elitist and exclusionary nature of the art industry, closes off the potential for larger POC communities to feel included in contemporary art spaces and discourses that often do not include or represent them.

By simply inserting his body in a Eurocentric contemporary art space, ‘Uhila, as a Tongan man, combats this lack of representation. It is unrealistic to frame ‘Uhila as a representative of his culture and community, or to only consider his practice from this perspective alone, as his work cannot encompass the complexity and variety of narratives that exist in one culture. However, his practice shows the potential for self-representation amongst individuals who are part of diverse, yet stereotyped, communities. The inclusion of movements, signifiers, and concepts specific to ‘Uhila’s culture positions the work both about and for his cultural community, and is a way of sharing knowledge about a culture with people who may not be familiar with it. By drawing on specific cultural knowledge, audience members may feel more welcome in these otherwise alienating spaces when they see themselves and their community represented.

Bodily gestures used in performance art don’t usually mimic what is considered everyday behaviour—performance art can be inaccessible because the gestures are seen as bizarre or illegible. It is a specific kind of language and form that can be exclusive, but that is a language that can be shifted to make it more accessible. It is not common for an artist to sit in the window of the gallery during opening hours and to open up interaction with their audiences, but it is gestures like this that can simultaneously challenge the perceptions of performance art and contemporary art spaces. To develop a more accessible discourse, more emphasis needs to be placed on the identities of the practitioners and the audiences who engage with performance work.

The space in which performance art is displayed can also affect how approachable and accessible the work is to a larger community. Exhibitions like INFLUX held at PĀTAKA Art + Museum in 2017, showcasing several Pasifika artists—many of whom were performance artists—in a community that has a large Polynesian population is one example.12 By including the commonplace objects from their communities like the sapelu, salu, and ili in their 2017 exhibition at Enjoy, the collective WITCH BITCH (part of the larger artist collective FAFSWAG), offered their Polynesian audience members an access point into the work by exhibiting objects that are familiar to them.13 Simple gestures from institutions, like inviting community groups for visits and talks, not only allows work to be seen by those communities that would benefit the most from viewing, it also allows them to become familiar with the setting in which the work is displayed. Ideally, this would foster a relationship between galleries and more diverse audiences, and there are many artists, some of whom I have mentioned in this essay, who are making those relationships a reality. As I also mentioned above, examples of Sri Lankan New Zealanders creating performance art are difficult to find, but I hope as more POC bodies are included in contemporary art spaces and the more these practices are encouraged, it will not be as hard to find these examples in the future. Ideally, this would make it possible for communities like my own to have a better relationship with the contemporary art industry, so that it may reflect the culturally diverse reality of Aotearoa.

Dilohana Lekamge is an artist and writer based in Te Whanganui‑a‑tara. She graduated from Massey University with a BFA (Hons) in 2015 and is currently a facilitator at the artist-run space MEANWHILE. Her work has been published through Pātaka Art + Museum, Christchurch Art Gallery Te Puna o Waiwhetu, Adam Art Gallery Te Pātaka Toi, The Pantograph Punch and in 2017 she was a Writing and Publications Intern at Enjoy Public Art Gallery. She is currently participating in Extended Conversations, a programme for emerging art writers in Aotearoa, March – November 2018.