Diversifying and moving through the hidden city

Human geographers have long been interested in the diverse ways that people use space. From how people move between and across spaces, contest and resist dominant expectations of how they should act in certain spaces, to the ways human action is always entangled with the non-human world. Heather Hayward’s Hidden City (2016), reflects these geographic preoccupations by juxtaposing two gentle videos that explore the use of urban space and movement between different places. The first shows a man walking up the centre of Pirie Street in Mount Victoria, Wellington, as the neighbourhood slowly wakes up, sunlight improves and people walk dogs and go jogging. The second film chronicles a bus trip along State Highway 2, from Wellington north, through to Lake Waikaremoana. This video depicts a real-time perspective of the changing landscape through this part of New Zealand. 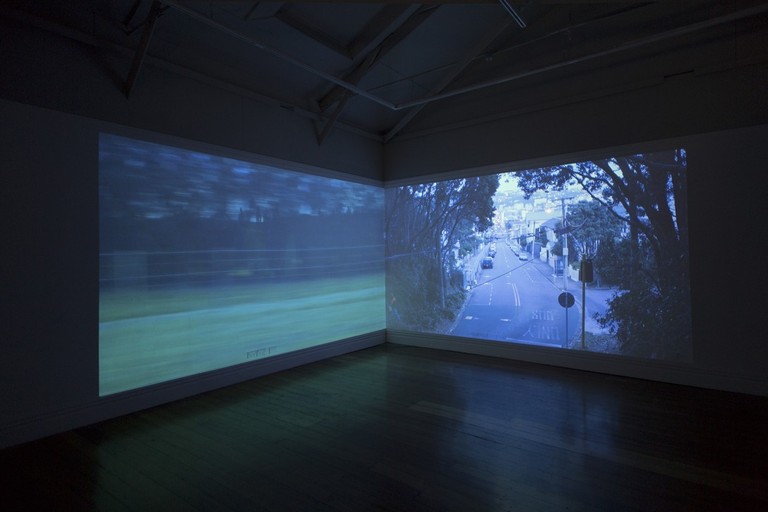 In talking with Hayward about this video work, she describes how for her, it functions as a ‘note’ from a larger documentary film project called Stevo. The film Stevo follows the man we see walking up Pirie Street in the first video, as he negotiates waged work in Wellington and the diverse economy that connects his home in Lake Waikaremoana to his life in Wellington. In the film we observe how Stevo generously navigates and overflows simplistic notions of what tend to be represented as very different places—the urbanised, capitalist space of the city, and the rural, predominantly Māori space of Te Urewera. In this way the film reflects work done by feminist geographers and those in the Community Economies Collective by illustrating the diverse and fluid nature of contemporary economies and subjects.

Dominant narratives around the economy tend to represent it as essentially capitalist—where waged work and the exchange of money are seen as the single most important parts of our economy. In these dominant narratives other forms of socio-economic exchange (such as bartering, gift-giving, sharing, cooperatives, foraging, and using common resources) are either dismissed as insignificant, or idealistic pipe dreams that could never work in contemporary society. Such ‘alternative’ practices tend to be relegated to the past and romanticised as part of ‘simpler’ and ‘less-developed’ societies that either resulted in tragedy as the commons were unmanaged, or became replaced by capitalist efficiency and development.

What we observe in the documentary though, are the subtle ways that Stevo makes a life for himself and generously contributes to others’ lives through diverse socio-economic practices. We see him trading food from Lake Waikaremoana with Pandoro Bakery in Wellington. We observe him giving his taxi driver fish as payment for a ride.  We see him walking up Pirie Street to collect kawakawa for food/medicine and we observe how he collects utensils, containers and gifts in Wellington to take home to family members in Lake Waikaremoana. The film ends with Stevo returning to his home in Lake Waikaremoana, taking the bus trip depicted in Hayward’s real-time video in Hidden City. Through these actions and movements, Stevo reminds us of the diverse possibilities for living that are already available to us. He does not argue for this diverse economy based on a moral imperative, or call for a revolution to replace capitalism. Rather, he generously opens up to others through everyday exchanges of food, service and care. In reflecting on how Hidden City and Stevo connect with concerns in human geography, we were stuck by two themes—diverse uses of the city and migration stories. 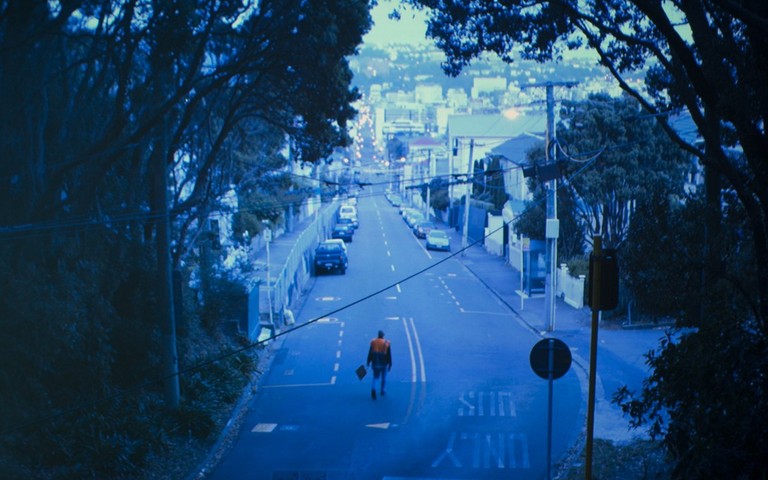 Diverse uses of the city

In Hidden City we see Stevo walk up Pirie Street before moving off into the Wellington Town Belt to collect kawakawa leaves that he uses for food and medicinal purposes. The Town Belt is land that was taken from local Māori by the Crown in 1839 and vested with the Wellington City Council in 1841 to act as recreational public space. The original intentions behind the Town Belt were mixed—reflecting Victorian and colonial anxieties around urban health and town planning trends. The Town Belt was partially underpinned by the idea that the working class needed a place to breathe fresh air and enjoy recreational activities on communal or public land (given that most workers could not afford to buy land for these purposes themselves). However, the Town Belt was also intended as a form of development control to ensure land and house prices in the central city area retained their value. We can therefore understand the Town Belt as a space that reflects historical processes of colonial dispossession, as well as a kind of urban commons protected through local government legislation from capitalist enclosure and development pressures. What this reflects is the diverse ways in which urban space is constructed and valued. And we see this diversity reflected to some extent in how Stevo interacts with the space. He uses it in the conventional way intended by the Crown back in 1841—as a recreational and walking space. But also less conventionally, as a space in which to harvest and forage. For us Hayward’s work is politically useful in that it reminds us of the ways in which urban commons persist, despite the seemingly ever-increasing marketisation of life and economic enclosure of resources. 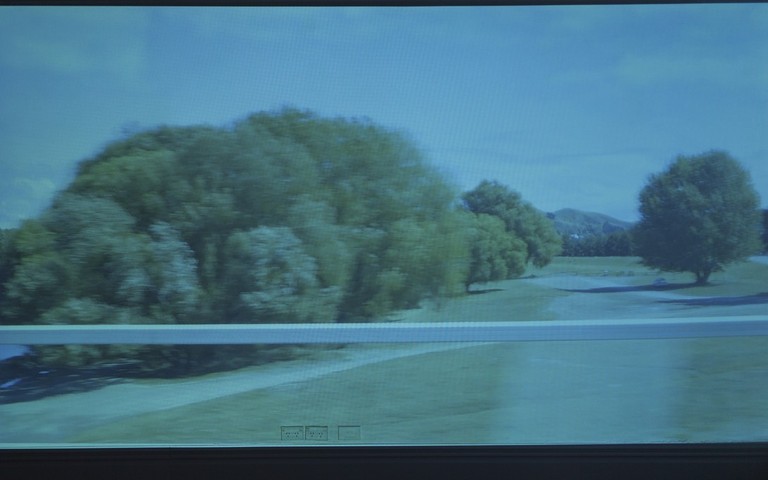 The migration of Māori to the city has often been told as a narrative of dispossession brought on by both capitalist and colonial practices of enclosure. This dispossession can be of land, culture and a sense of place or belonging. While acknowledging and redressing this dispossession is very significant, we also need to hold this in tension with more nuanced understandings of actual migration stories and the agency people enact and cultivate—even when migration is forced or undertaken out of a sense of need. Critical literature in the field of human geography now tends to explore how subjects use migration strategically, to enact forms of agency, and the ways in which migrants often enact multiple economic identities as workers, caregivers and entrepreneurs while ‘away’ and as providers, leaders, traders and developers when ‘home’. Māori geographers have looked even further back than the relatively recent legacy of urbanisation in Aotearoa to seek migration stories from tupuna such as Kupe, who travelled extensively and skillfully throughout the Pacific. In this tradition, Barcham et al., (2009) suggest that the ‘Polynesian triangle’ has expanded to include Los Angeles, Sydney and Auckland in a back and forth flow of Māori and Pacific Island peoples with concomitant flows of remittances, gifts and food.1

Stevo’s back and forth migration from Wellington to Waikaremoana and his movement around Wellington allows him to move back and forth, between—and even simultaneously inhabit—multiple economic identities. Hayward’s depictions of his movements and his diverse socio-economic practices refuse to tell (only) the story of dispossession, revealing how Stevo enacts something bigger, something more empowering. In a way, he is a ‘postcapitalist’ subject, one who refuses to identify only in the story of capitalist accumulation or dispossession, one who both draws on and enables a ‘something else’ that is already here in part.

Gradon Diprose is a lecturer in the School of Health and Social Sciences at the Open Polytechnic. He has a PhD in Geography from Victoria University and has worked at various tertiary institutions and in local government across Aotearoa New Zealand. His current research focuses on how community economies can foster an open sense of place and community connection, in the face of increasing precarity and socio-ecological uncertainty.

Kelly Dombroski is a lecturer in Human Geography at the University of Canterbury. She has a PhD in Human Geography and Anthropology from the University of Western Sydney. She is a member of the Community Economies Collective and writes a blog called 'throwntogetherness', which is informed by the work of feminist geographers, such as Doreen Massey. Her research draws on the work of J.K. Gibson-Graham to rethink the economy alongside all the everyday work we do to support life.