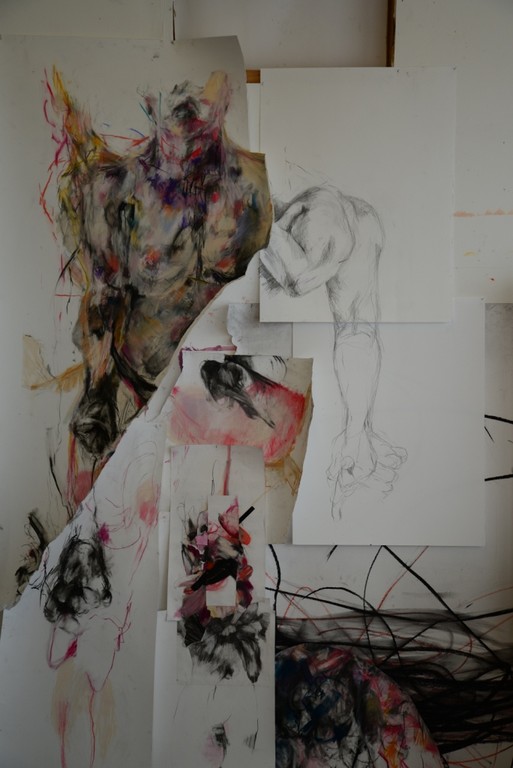 Writing around Sian Torrington’s work Self Portrait, which appeared in the group show Love Feminisms at Enjoy Public Art Gallery, November 12 - December 12, 2015. Both the work and this article contain sexually explicit references.

I imagined a guy, a nonspecific guy but some kind of celebrity gender like a young Joe Strummer or forever-young James Dean, and how it would be if his high upswept hair, in the course of his exertion, were to give out. Forelock descending. The tips shaped into a wet spike by the run of sweat. Dangling in the airspace in front of that sweltering cranium.

You were in my airspace, hovering over, giving cover, exerting yourself. Working away, workingman. Your hair then was a shock of pink and so was this sweaty fallen forelock above me, in my heavens.

My heavens. The wanting. I saw him numerous times, he. He. Him. In beds in the suburbs of Newtown and Puke Ahu. Vigorous, forceful. But I dared not whisper in your ear about how I admired him, wanted to suck his biceps and else. You were so proud and protective of femme; once, early on, I had said Yes sir to you and you’d said I’m not a guy. As if a minor in guy cannot coexist with a major in femme. I don’t think I was consciously observing anything genderful on that occasion but was merely responding to a command in a mock-military manner. But I took on the advice not to sir you, and took care, and when I first saw him I indulged the vision quietly. I suppose it could be said he and I were at it without your knowledge; he is uncaring like that, a brute, and I on the other hand was taking care.

Not to tell you. Our joint mission is to listen.

Later, when you found him yourself it was through gesture, of course. An action of your hips. You thrust until you cried. Did this mean the death of your femme? No. Did it mean some kind of relief? I don’t know. I suspect so. Sean, you named him. We were at Waikanae.

It has been a long, frozen sleep, in which feeling was lost. It has been years of pretending I’m able to submit, because I have a cunt and I like pink, and so I’ve been told I should be able to. And now when I sense that expectation in response to my body, what I feel is hate. It rises like a pure force of resistance; remembering all the times I tried and felt so numb.

Rescues attempted on cold bathroom floors, alone. It does not come out alone. But who can I trust when strength and masculinity are owned or at least viciously patrolled? I knew I felt sexy in my paint-stained jeans and proud no-one needed to help me. But that belonged to me. It’s been lonely, and I didn’t realise I had the key in my pocket along with the nails I stashed there.

It is yours and it is mine. It has always been here. It is rooms behind doors I couldn’t find. It is layers of body. It is more wordless and shifting than I could have imagined. It is reflection which doesn’t come without an other.

Because where do I find myself? Between violence and passion and the monster I am terrified of being, there’s not much space. But when you invite me, it feels good. You say it’s OK; push, shove, thrust, and my body releases and time falls into pleasure.

He cleans your shed of cobwebs, shirtless, washing in rolled-up pink pajamas because you say you’re stuck. It takes all day, and at the end of it he sits in rolled-up jeans and roasts you marshmallows. Because loving is doing; clearing a space.

There are certain positions—his body over you, and how he sits in a chair as if he owns it, no matter how big it is. He is greedy and self contained and hungry. He never lets you say I love you, and all the boys are after him.

He is with me when I build. I didn’t realise how good it would feel. She says ciao Sian/Sean and something loosens in that big, strong chest. In language the swirling coalesces.

Returning to the body and finding it changed and changing, making becoming.

And if I can only come when I close my eyes and my cock is half way down your throat, am I still a feminist?

I took a first-aid course. Make decisions about survival. Walk away from those bodies who bleed too much; tend to the ones you think will get through. Give no water and no food to those with internal injuries. The hypothermic and the diabetic should be quick fixes: warm drink and soft drink, respectively. And what about the shamed woman—bleeds too much plus internal injuries. Should we just walk away from that one? Sad case.

111, what is your emergency? Please, UNDER NO CIRCUMSTANCES send the gender police. Please send the shame ambulance, the one that intervenes every time a person is shamed who is a woman or has experience as one. She has been told her blood is foul, her vagina’s a mess, a mess lying under a shag’s nest, and the hunger of her body, for fats, for protein, for semen, for silicone, for a four-fingered cramming cramful, for solitude, for self, for horsepower and to give thrust, is all very high-risk hunger. She has been told she is so stupid for trying it, trying out her body. Daredevil dumb cunt. So now she is in a critical state of shameshock. Send the ambulance.

The ambulance officers go through a checklist, seeking basic esteem information: what shall we call you, name and pronoun? Is there anything you need or want at this time? Maybe you want emergency artefacts, the things from childhood that made you feel safe and good, might be a teddy bear might be that parents’ bookshelf book you were always peeking into, dusty Kama Sutra, might be the clothes of your koro/kuia you were always dressing up in in order to feel right in your skin.

Your skin, it’s yours, the femedics of the ambulance will say things like, because reassurance is important in first response. They will try gently to make you laugh and revive your delight. Ease the pressure on the wound. They will say wasn’t that person tangled up in knots? And they will offer you drinks both warm and soft; anything you like you can have, it’s OK. It’s OK.

The problem is still the body; queer, kinky, strong, genderqueer, bolshy, sick, sensitive and hungry. It is excessive and intuitive and gut driven. It is is hot, red, blushing, elbowing, too big in a white room. Feminist, artist, lesbian, queer, femme, dominant, activist, masculine, brute.

Yes, all of these.

Should I rein things in? Rub out the finger prints on the edges of drawings, keeping them a clean space? Less is more they tell me and tell me. I find there are things I fear to tell. They are too big, too awkward, too demanding, too wanting.

You ask for my hand and I give you my fist. I want to get stronger and stronger. I want so bad to lift you.

OK, I get that you are scared. I am not scared because I have immunity. I cannot even tell you how I got it. I remember caring what people think, but I don’t remember how I learnt to forget to care. Maybe I learnt at rock bottom. I do remember thinking it’s a muscle that gets stronger with exercise. And that not everyone has the privilege of hiding.

My cousin works in the mountains and he told me about glacial retreat. He said he loves to cross ice and snow and get about the mountains that way. He is a brutey just like you. I can see him moving inhaling confident over the blue-lipped stack of ice. It’s calm up there where it’s cold. I know this because I walked alone over some snowy hills once. People said I was putting myself in danger, but it’s calm up there. I believed I was keeping myself safe.

Then my cousin said the new thing they are coming across is moraine that hasn’t been exposed before. That kind of debris takes millennia to settle down into what we’d call ground, he said, and in the meantime it is not ground. He is a big strong brutey and he said he is scared when he tries to get about the mountains on these slippy slopey stones, and it’s not calm he could be buried alive so easily and the sound would be shhhhh.

And so they retreat from the moraine; they do not tread on sites the glacier has newly exposed. They rest. This future ground rests. The most untouched places on Earth are the places that constantly shift.

Galleries are white, clean, and there is an assumption that if you put a lot of things in it, you didn’t make enough decisions. But mass is a very deliberate and bold decision. It’s not that I accidentally ate too much. It’s that I want to feel my body and this is the only way I know how to find my way back to that; to say yes to everything, just for a change. It’s not that I am not bothering to be feminine; it’s that I always felt secretly sexy when I am strong; lifting and building my own way. It’s that I am trying to explore something which doesn’t want to be regulated.

Artists make many things, but when we show in galleries, we hide the many in favour of the one final work or body of work. In doing this we exclude failure, accident and the trying energy of practice; the fact that making involves many repeated tryings and failings.

Body, appendages, fucking, being, remembering, becoming. Slippages, strangeness and mass of simultaneous embodied experience in sexuality and gender. I try hard to allow the marks; to cease the censoring and control; a mass of drawings, experiments and trials.

I am working against fear.

Bodies; active, embodied, messy, aggressive, self-formulating subjects. Mark and gesture, draw and repeat. The movement of battling it out of everything it has been told.

Through intimacy, reflection and interaction with itself and other bodies, it becomes known. Through the process of making, it becomes visible. What is represented from the inside. I cannot speak for anyone else, only for me, from me. In this I reflect the highest value, of consent; to be a fully consenting adult, one must be fully informed, and know oneself as fully as possible.

I am involved. I am implicated.

Siân graduated in 2010 with an MFA with distinction from Massey University, and has shown her work nationally in many contexts. She works from a studio in Lyall Bay.

Creek Waddington is a South Islander who lives in Wellington, and is Siân’s husband & wife. Creek is interested in queer biodiversity.