Everything I Know at the Top I Learned At The Bottom

Marnie Slater’s solo exhibition at Enjoy comprised several elements playing with gallery and public intervention, spatial transformation and artistic collaboration. At the opening the labels on the beer bottles were replaced with a mysterious insignia, the gallery viewer walked into a room darkened by venetian blinds to a box of plants growing, assisted by a ‘growth light’, in the shape of that same symbol. The feeling was of something sinister going on. I talked to Marnie about her show, and asked her how it related to her wider artistic practice.

JR: In the writing for the press release for your show, you described Everything I Know at the Top I Learned at the Bottom as your first ‘solo’ show. You were however also keen to emphasise the role Daniel du Bern and I played in the exhibition by crediting us on the flyer. Was this an intentional ploy to confuse the role of collaborators and artist as director?

MS: The choice to intentionally articulate what would seem like contradictory strategies was an important part of my approach to the exhibition. My way of working increasingly involves multiple parties in the conceiving and realising of projects. These ‘collaborations’ are most often employed because of a perceived lack in the work that I cannot or do not desire to fill myself. Often there is an urge to give over bits to others; with EIKATTILATB the collaboration and resulting allocation of authorship became particularly complicated. The presence of you and Dan was central to the exhibition, both as residue (image and text) and as fellow ‘authors’. But your presence was highly mediated by the assertions I chose to make.

For instance, Dan had used the text ‘EAT SHIT DIE’ initially as a set of three works on paper. For EIKATTILATB I asked if these words could be painted on to the exterior windows of Enjoy, viewable from the street below. I talked with you and Melanie about the possible public offence the text could cause, and it seemed fitting that you, as a ‘collaborator’ in the project and also as an employee of Enjoy, took the flack from the only ‘public’ who chose to complain.

JR: Yes the reaction was, although not intended, expected by you. I think I was surprised that there wasn’t a bigger reaction. The windows of Enjoy are quite a shopfront for the gallery and Cuba Street, which they look out to, gets a lot of foot traffic. After talking about it with you, I think I came to interpret it as more of a comment on mortality, or the futility of our whole life cycle rather than an aggressive instruction. It’s also nothing worse than a lot of the graffiti you see around, but I guess people interpret meanings differently when the writing appears so considered and becomes recognised as a statement representing the gallery and the building, rather than as a particular artist’s work.

I think there was cheekiness and cynicism present in your show. I think this was outlined from the title—laughably arrogant, self-important—but then was continued through into things such as the ‘happy’ light you used at the entrance too. It expressed a cynicism towards the whole ‘self-improvement’ industry. What immediately came to mind were self-help books (like the book you took the show’s title from) and audiotapes, 1980s greed and consumption and late night infomercials. But then I wonder if art comes into this too. Is making work a process of self-improvement?

MS: The windows of Enjoy face out, not just onto the car park but they are also in direct view of one of Cuba Street’s more expensive places to eat. After the opening my family went there for dinner and asked their waiter what his customers had been saying about the text. He implied that most just laughed it off as being symptomatic of the particular part of town and, when told it was art, thought nothing more of it.

With EIKATTLATB I wanted to employ the gallery as a site where a kind of approach or position was frozen in the process of being both done and undone, with being presented and undermined simultaneously. There was a kind of posing and posturing to the project, an assuming of an exaggerated identity, which was played out in the title of the show, the flyer image, the nouveau-riche foyer, the re-branding of the beer bottles at the opening, the ‘offensive’ statement on the windows. I wanted that exaggerated identity to exist as both my role as an individual author and also as a concept capable of encompassing and masking the collaboration; where the agenda, not the praxis, being presented was unclear and the flexibility of your chosen role within any resulting meaning became more ambiguous. Contained within this desire to explode the manifestation of identity is an interest in how objects and languages are communally systematised to confirm a sense of self. 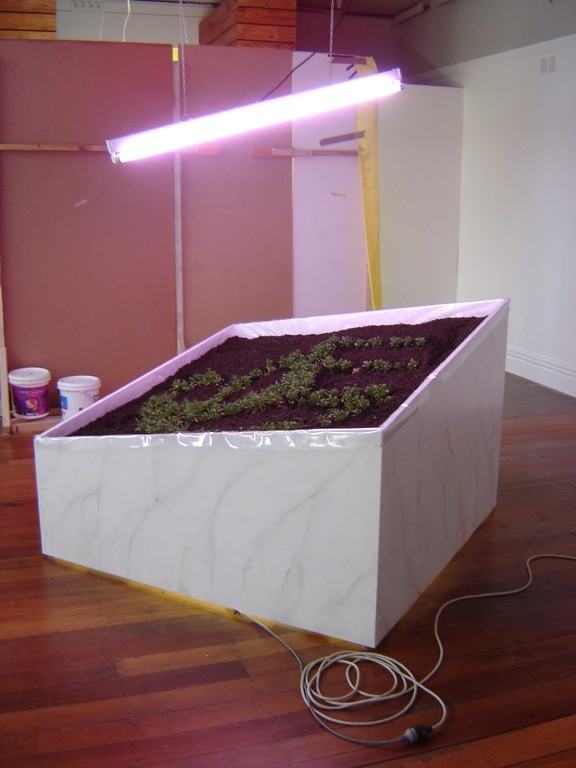 JR: I was wondering if you could talk more about some of the influences of the formal elements of your show? Why you chose some of the elements; the prop-like set up of the unfinished wall, the governmental office feel of the venetian blinds, the faux marbling painted on the plant box...

MS: Some of the objects within the installation borrowed from a vocabulary of the commercial and existed within the gallery as sculptural copies - mostly made, assembled and surfaced according to how I observed them existing outside the gallery or my studio. My research process for these copies was incredibly loose and most often the resulting object looks similar, but I have no interest in having things made in strict accordance with existing commercial specifications. Like the inclusion of other prefabricated elements, the blinds were chosen simply because they were the ‘blindiest’ blinds I could imagine.

The wall (between the gallery and the office) in EIKATTILATB was unfinished, frozen in the process of being finished. It was one of those opportunities that come up during the development of a project as the gallery was building a permanent partition wall anyway. It was a way, similar to the portrait of you, to introduce the politics of gallery collaboration into the show (as negotiating with the gallery to leave the wall unfinished for the show was required).

I think in my recent work there is a desire to explore public galleries as sites for public display and involvement/provocation. Within this is an interest in the visual manifestations of institutional infrastructure and how this can be tampered with or altered in relation to a gallery visitor’s expectations and experiences with an object or within an environment. I am interested in how a gallery (in terms of staff as well as architectural schematics and installing mechanics) can become more involved in how a work is conceived of, exhibited, and engaged with.

JR: Yes, often there is a high level of staff involvement in a work shown at Enjoy. Even if it’s just describing or talking to the public about an exhibition has a huge impact on the way the work is read. In your show there was my specific involvement in the photograph at the entrance, but there was also gallery sitter involvement in trying to encourage people to go outside and view the window writing from the roof and the attention required for tending to the plants, watering them daily. So there was a large performative as well as interactive element.

MS: Yes, and I think there is a specificity to the gallery as a site that I only began to consider after made for an art school context. As an interior, galleries have a range of features that are very particular to perceived notions of how they are used. Walls, floors and ceilings are employed in ways that are antithetical to how we ‘normally’ use interior domestic or commercial spaces. In a way, galleries offer liminal or transgressive possibilities for spatial experience and exploration. Then there are also the people (such as you and Melanie) who work at a gallery, making sure the place ticks over on a pragmatic level, but also making it an exciting, engaging place for people to come hang out. I am interested in what I see as sometimes contradictory experiences of galleries. Artspace (in Auckland) for example, has a staffed office removed from the main body of the gallery, my work ‘We Are All Professionals Here’ (2005) attempted to address that separation by providing a live audio feed from the office to a small space at the opposite side of the gallery. Despite the huge proliferation of video and sound work, galleries remain quite static places. There are staff and visitors but, on face value, their presence is not necessarily integral to the work operating. Galleries have always been active places for me; I remember gallery sitting at SHOW in Wellington and being told by a visitor that the conversation between myself and a friend was interrupting her looking at a drawing. Later that afternoon we used the gallery to improvise a dance routine involving the gallery step ladder!