At Home (In Transit)

Vivien Atkinson is a woman who has done a lot of travelling in her life. For almost twenty-five years Vivien never lived in one place for more than eighteen months. This itinerancy has formed the basis of much of her research and artistic practice. Global mobility is a concept with particular relevancy as much recent critical theory has explored ideas around travel with regard to tourists, exiles, immigrants, expatriates, refugees and the notion of location determining identity. Edward Said used his own experience of growing up a refugee to formulate his arguments relating to Western perceptions of the Middle East, the plight of Palestinians and their need for a homeland. Atkinson’s work references this territory, questioning assumptions of geographically bound identity. Maps, atlases and place names, the signifiers of place and travel, have become motifs of her practice.

While Atkinson’s experience would sit to one extreme end of the spectrum, Western society as a whole has seen a shift towards greater global mobility in the last twenty years with international air travel becoming more affordable. Itinerancy has been reflected in the growth of other industries as well such as professional movers and relocators, immigration and passport services and the storage industry. There are now over a hundred self-storage facilities in New Zealand, which account for almost 200,000 square metres of storage space. This means that people are paying to have their possessions, their ‘stuff’, held in transit, either long-term or temporarily, not necessarily to be used or accessed, but just to be there, accumulated and kept. 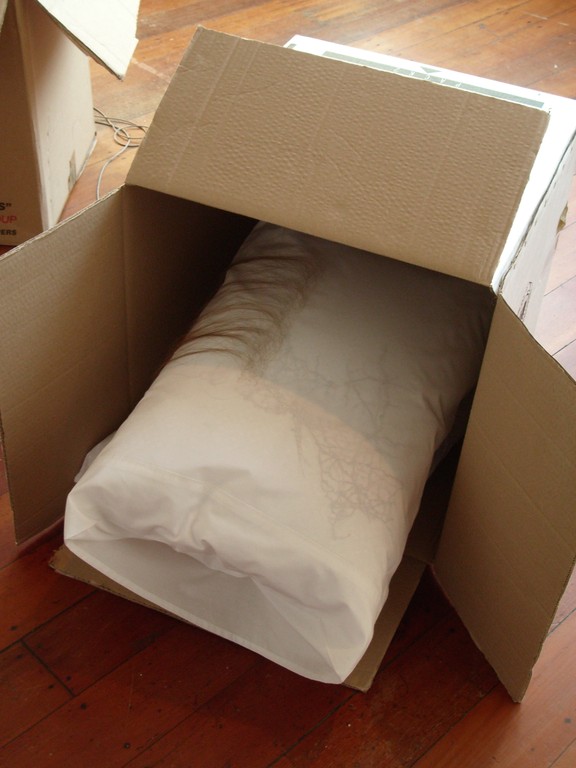 While on one hand the accumulation of possessions and objects can provide a reassuring comfort, as they contain memories and acquire sentimental attachments, it can cause a great deal of anxiety. Walking into Atkinson’s exhibition At home (in transit), this anxiety is palpable. A collection of professional movers’ boxes is artfully strewn across the gallery floor and I at once feel an overwhelming desire to order and unpack them. The different names and logos of the moving companies tell a story of Atkinson’s travel. Some boxes are sealed, some are ajar and spew packing materials: scrunched newsprint and shredded maps. Some of these materials, brown packing tape and paper, are the residue of Who am I Where am I, where Atkinson employed a professional mover to continually wrap her for the duration of the performance, was repeated to accompany this exhibition. Adding to the confusion, a tangle of wires link and loop between the boxes. These signal the cacophonous sound recordings emanating from within – what sounds like the pilot of an aeroplane reporting to his passengers, a taxi driver speaking in a foreign indecipherable language, ominous hums and fuzzy feedback.

On further investigation, I see that some of the boxes contain bed pillows, a symbol of domesticity, comfort and safety. In neat, fine stitches the outline of single words have been sewn in human hair onto the pillows. There are four pillows in total with words sewn in hair in different languages, one reads ‘Home’. The white cotton of the pillow is translucent like an eyeball, bloodshot with capillaries. Looking closer I can see that these are in fact the roads from maps painstakingly cut from their surrounding land, resting under the pillow cover surface. The maps are of places that Atkinson has lived, but the roads out of context are meaningless, like the blur which distant memory creates. One thinks of veins, and the warmth and sweetness associated with home is undermined by this visceral reminder of our bodies, which grow and degenerate, constantly changing too. The hair takes on greater poignancy when I later learn that it is a combination of Atkinson’s own hair and her daughter’s. Carefully and lovingly fashioned on the pillow, something not expendable or disposable, but to be treasured and passed down through generations.

Perhaps because At home (in transit) was staged in early summer, and I noticed the days getting longer and the sun reaching higher in the sky, and the clean, otherworldly, almost heavenly atmosphere created by Atkinson fogging-out Enjoy’s wall of windows, my impression was of the exhibition as resoundingly quiet. This is unusual for an installation employing sound samples and loops layering over each other. One felt the need to tip-toe around the boxes, crouch over to admire the impeccable handiwork and decipher its meaning. While simultaneously evoking the mental haze and anxiety that being uprooted and moving can impart, Atkinson had created an installation of calm beauty, a peaceful sanctuary where one could take some time to reflect.