Do we often think of our bodies at specific locations, mapped onto the surface of the earth, yet not articulated from one moment to the next? Movement of our bodies, in temporal and physical space is momentary. Yet movement is also continuous. The ‘terrain’ we cover is as consistent and persistent as our body moving across physical dimensions.

Mapping is a process whereby presence can be marked out, certain points clarified, articulated and finally brought to bear. Locations on a map can then become environments. For what is a map but an abstracted representation, a visual coding of a specific site? And what are these sites if not houses, homes, landscapes, landmasses, and landfills? They reflect presence and absence, being, going to and from, feeling safe, not feeling safe, comfortable, and uncomfortable. As Laurence Simmons suggests, viewing is far from an objective experience when it comes to artistic representation. When we view something:

it should not be forgotten that the frames of genres are also presuppositions held as much by the spectators of the paintings as by the painters of them. Looking at the land through the frame of genre makes the land able to be perceived.1

Think about a dog barking for instance. Think about its associations: dogs barking on a property, on a territory, which is in turn markedby the presence and absence of bodies, which then delineate a location as an environment. Barking could conceivably be a signifier of a specific location, a house for example. ‘Black Velvet’ (2005), a sound installation of a dog barking, could be all of these things, but it is not. It is a sound installation of a dog barking at the SPCA. It is itself abandoned; it has no environment from which to exist, but that of its temporary location at an animal shelter. From this perspective this creature could be mapped as well, it is the recorded sound of a dog, at a specific place in time, at a specific location. It records not just an event; it records a place, the Wellington SPCA. It was obviously recorded at a specific time, and thus places this dog at a location, at a certain time, just as it places the artist.

The presence of the artist is felt in ‘Out of place with punctuality and precision’ (2004), as well. It consists of two photographs, each detailing the specific location, length of time it took to get there 2, and finally the documentary evidence that the artist has provided to depict the event. Walking, then, becomes a significant act. By detailing and producing a visual record of each walk, where the route has been decided via a tourist guide made by local councils, the artist, while documenting her own walking experience, has relied on mapped out situations to establish a context for the project.

Significance stems not just from how we determine a situation and what we perceive when we experience an environment, but also from how we characterise that experience. In the works of Karen Adams, what we are privy to is not a single moment. Information is received via coding of the event depicted. What we are viewing is a representation of a process. This process has a beginning point and an end point. We are provided with locations, for example: Shelford to Cambridge. We know that the walk covers a certain distance: 13.2 miles (notice the use of decimal and empirical systems). The date: 28th of August 2004. Length of time taken: 8 hours and 30 minutes. And we receive further information: ‘In a further 160 metres, go over M11 foot bridge, the top of which offers a panoramic view of the landscape’.

With ‘The Cold Front’ (2005), by Angela Meyer, the viewer is confronted with a map spreading across the walls of the gallery. That the work is constructed with 20,000 dressmaking pins alone is impressive. It traces across, from one wall, traversing the floor, over onto the opposite wall. But what is it a map of? The title is abstracted enough to make identification of a place challenging. Rather the impression is that it refers to the weather, a front. So a meteorological event, a front, pushing across a landmass, affecting conditions on the surface of the earth, making its presence felt, establishing an environment. Weather is a constant. It is always present, conditions may change, but only in relation to the way it transverses the surrounding area. Weather, when mapped out, is detailed according to the ways in which it travels across a landscape. It is a reminder of how change is present always. Right now, for instance, the weather outside is sunny. Last night it was raining and cold. The same place, but my experience of it is defined in conjunction with climate. If I were to look at a weather map I would see that the atmospheric conditions represented merely act as a visual guide. If I looked for a long-range forecast I would know that where I am now may indeed be sunny and clear; but that it is subject to change. 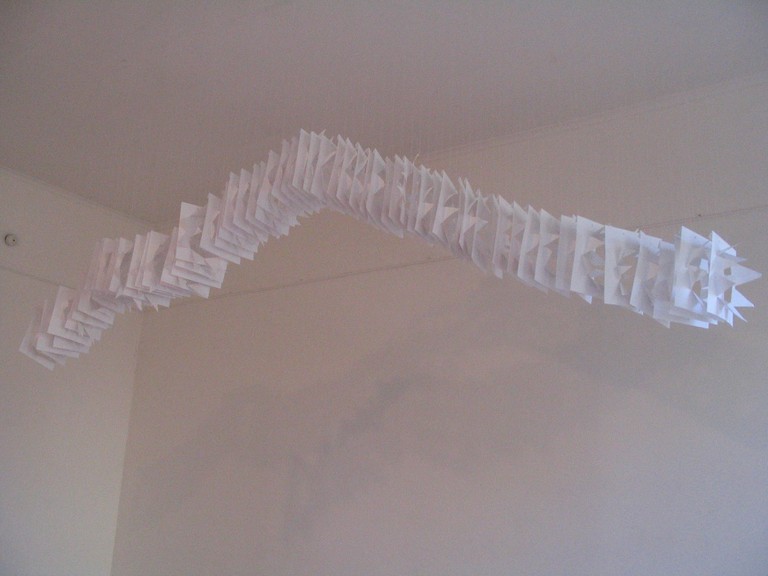 Sonia Bruce’s paper construction ‘Untitled’ (2005) is perhaps harder to contextualise. But the paper itself seemingly moves from one point to the next. A succession of one piece of A4 paper to the next with holes coming outwards from the surface of the paper. Moving upwards and then downwards as if measuring a specific movement like a graph. As it is static, the work incorporates a visual representation that seems entirely problematic. How does the work operate? On a specifically formal level it is exactly as seen. It hangs from the ceiling, held gently in place by thread, each piece of paper connected to the next, each piece displaying the same hole through the middle; a triangular-edged absence. One could say that the pieces of paper are simulacra of one another. But each location defers to the next; it is shape that evokes progression. So by creating a work from paper, and enacting a certain type of progression, one notices that from beginning to end the paper appears the same, but nonetheless depicts a kind of visually coded representation of movement. The shape and feel of the work refers to a process. Such an interpretation, however, does not account for the almost explosive hole making its way through the work. Or even that it has the look and feel of a disjointed event. The paper is in succession, but it is not clear: bits here and there are slightly lodged out of place, contact between each sheet is not exactly ordered. Each sheet is held in place by thread and has been placed in that order by the artist.

I want to offer an observation which is both about the Hunt show itself, and about the condition of topographical art; to invoke landscape, topography, a mapping impulse, is to invoke a system of visual representation that is far from subtle in its purposes, goals and methods. Topography is conditioned by a need to perceive the world, or at least a part of it, according to a precise visual schema, offset by a negotiated representation of space, and supplemented by text and image, graph, map, and the location of coordinates. Furthermore, topographical rendering is facilitated by a need to construct a detailed account of the land determined not only via geographical objective reality, but also a subjective reality, through which desire, and fear, foresight and forbearance are literally mapped, coded, into the translation of physical space and placed into a two and three dimensional construction of an idealised space. This may seem like a diversion, after all, these works evoke the topographic as it pertains to art, and are not exactly landscapes (though Adams’ ‘Out of Place with Punctuality and Precision’ could easily be considered as such). Topography indicates a desire to depict and interact with environments, environments that are susceptible to a remote presence, idealised. Yet topography is also scientific, objective and descriptive. What I would like to explore in the act of representation in topographical art is that very wrought moment of expressing the outside, and making it internal. Laurence Simmons, in ‘Bridging the Wild’, describes this moment as an attempt to ‘valorise the body as an agent of cognition’, thereby acknowledging the ‘reflective role of a landscape as a kind of ‘bodyscape’’. Meaning, in representations of landscape or topographical images, even maps, is at least partially constructed by our own experience, our own bodies in space and time.