Nowhere is there warmth to be found
Among those afraid of losing their ground
Rain grey town known for its sound
In places small faces unbound...

These lines from The Bryds’ infamous classic ‘Eight miles high’ seem a little token when trying to get in the mood for thinking on the deep connection drug taking has had with popular culture during the twentieth century, however the dredging of such histories in Morley’s most recent series of work advocates instead for a Mammon of opportunities. And while not everyone is familiar with the bodily experience of substance abuse, what is interesting to note and indeed what Morley shows us quite superbly is that everyone is familiar with the cultural language of such experiences.

Appearing like paintings made while high on any number of illegal aids, Morley’s new works reach straight into the well-established relationship drug use and hallucinatory visions have with the visual arts. Replicating on canvas the kind of optical visions of grand sixties cultural products such as those of Stanley Kubrick’s 2001: A Space Odyssey or the fabric designs of Emilio Pucci, Morley’s canvases invite you in with their amateur-like homage to psychedelia and the sixties dreams of art and freedom. And rightly so: wasn’t art part of the way forward? A flick through the decades of the twentieth century shows an insatiable chasing of utopian ideas that only the eighties finally managed to quell, along with, a now much debated, belief in painting. Any hangovers of such modernist failings however are well-heeled within Morley’s project. This is a show of paintings that can rest comfortably on its references. These are humble works for now rather humble yearnings.

The paintings ‘Midnight Cowboys’ and ‘The Lost Weekend’ provide, literally, the central leaning focus of the show. As two large diptychs measuring in excess of two metres across, these sizable works offer two hazy takes on a notion of split perspective that is physically enchanting. Rendered in companion to the hallucinatory experiences of the protagonist in the two films referenced as captions for the work, these paintings offer up a conversation between forms and times tangential to their own placement. For the majority of the film, Jon Voight’s character Joe Buck in Midnight Cowboy is a man struggling to find himself in sixties New York. Similarly, for Ray Milland in The Lost Weekend, the sense of personal travel is felt with increasing momentum towards a visual climax of both hallucinogenic visions and narrative resolution. In these stories, drug taking suggests journeys, and on many levels an offering of travel, both optically and historically, provides a consistency for this series of work.

One piece carries on another consistency of its own. Morley is well known for his paintings of turntables, reliably rendered with the needle mid-song and accompanied by a corresponding song or album title, for Enjoy there is one such lonely work at the end of the gallery. Playing silently the Palace Brothers’ title track ‘There Is No One What Will Take Care Of You’, this text is at first a somewhat tangential find among all the cultural yearning of other generations present in the room. As a contemporary kind of answer to those myths so lightly present in the colourful stripes of ‘Midnight Cowboys’ and ‘The Lost Weekend’, ‘There Is No One...’ also strikes me as an odd choice, or perhaps a tempering offer to the more flamboyant referencing of the other works. This is sad and current music. Will Oldham, the songwriter referenced, is himself a heroic figure within contemporary American folklore. A prolific artist of the melancholy, here playing within a painting, the show starts to offer new time-place relationships. Sitting adjacent to the nostalgia and mythical yearnings of the sixties and seventies here is something that connects to a current cultural phase, interestingly still dripping with a sense of yearning. 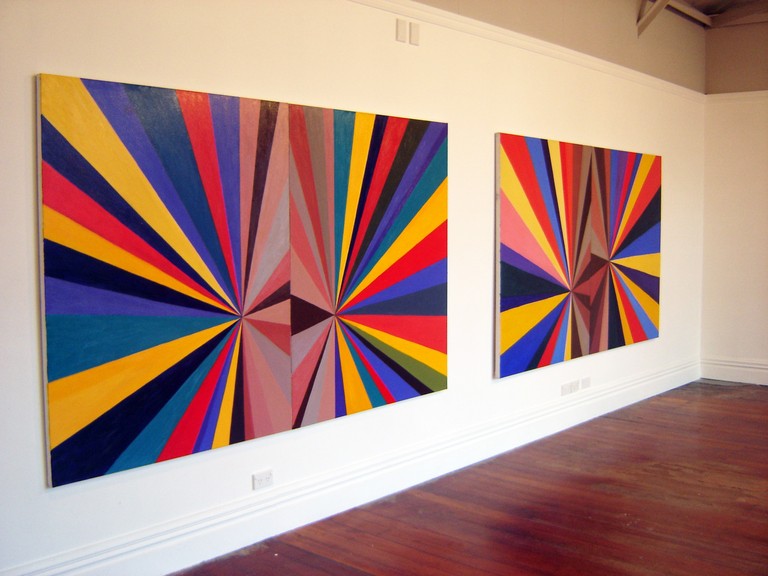 Previously Morley has stated that these turntable paintings are concerned with the possible recognition the viewer may or may not have with the musical reference given within this series of works. And in the ways in which the silence of viewing these works fills with the associations of the songs titled in these paintings, the new optical works that comprise the majority of this exhibition offer a similar space for cultural recollection. Artworks generally are attempts at relationship building of some sort and here this transpires through a series of cult and popular culture references offering us a chance to assemble our own personal connections and associations together with those of the artist. There is an easy and quiet triumph to these paintings, a celebration of what they know they are offering to us. These works tell stories of painting and drugs and popular culture in a way digestible and playful for those all those involved, stoned or otherwise.