Following the success of Enjoy’s inaugural 2004 Performance Week, we decided to do it again with Repeat Performance 2005. For five days Enjoy was dedicated to the exploration of contemporary performance art in its many forms. For 2005 we invited artists from within and outside Wellington to choose a performance of their own or from history to be re-performed. The results brought together theatre, music, acrobatics, mimed boxing, photography, narcoleptic episodes, amateur acting and some things which you just couldn’t be sure were performances or not. Repeat Performance asked whether a moment in time could be repeated, whether the elements of chance often inherent to performance can be planned and replicated, whether the experience of a performance can be conveyed through residual objects and documentation, and questioned the results of orchestrating a performance from a different city. By directing stand-ins, paying homage to performance artists of the past or by using an already articulated performance as a starting point for re-interpretation, Repeat Performance 2005 furthered Enjoy’s commitment to experimental temporal art forms.

On the first day, two performances by Daniel Malone were re- performed in the gallery, Doing Lines and Punch Drunk. Doing Lines continued throughout the whole day. The concept was simple: on a wall draw a line as long as the pencil you are using. Repeat. As
September 12 - 16 2005 the pencil gets blunt, sharpen it. As the pencil gets shorter, so do the lines you are drawing. Doing Lines was a tag-team effort, with each viewer to enter the gallery offered the opportunity to take a turn at drawing lines. It was a more time and energy-consuming activity than initially anticipated, which resulted in one bleary-eyed visitor frantically trying to get to the end of the pencil before it was time to close the gallery. Punch Drunk saw Marnie Slater stand in for Malone, as she donned boxing gloves and repeatedly punched herself in the face before an audience. Between each ‘round’ of boxing, Marnie took a swig of Malibu and juice, had lipstick applied to her and kissed out the words ‘Once is never enough’ on the gallery walls.

On Wednesday, Bryce Galloway organised six couples to read, record and act out a transcript taken from an evening at home he’d had with his partner when Nick Cave was playing in town. The performance The Night of the Nick Cave Concert played out like an amateur version of Waiting for Godot encapsulating the boredom and frustration of being stuck at home when it feels like something more exciting is happening elsewhere. Each couple’s take on the reading was slightly different, stretching from hammed-up to deadpan versions, some trying to give a natural, fluid reading of the script while others embraced the futility of such an attempt.

Thursday evening saw Amy Howden-Chapman and Biddy Livesey perform Piano for Falling Man. The pair harnessed themselves to the gallery ceiling and, working on a pulley system, raised and lowered each other upside down directly above two synthesizer keyboards. The blacked-out gallery and spot lighting cast dramatic shadows against the wall behind. Each bodily movement had a mechanic decisiveness, which complemented the preset drum machine beats and keyboard drones of their accompanying music.

On Friday night, Chris Cudby as Golden Axe gave a lo-fi multimedia performance incorporating a smoke machine, ultra-violet light, projected found images off the internet and some of his own music on keyboard. Other images Chris had produced himself in rainbow colours using the rudimentary computer program Microsoft Paint. The performance was a disorientating sensory overload of colour, sound and light.

Other performances were presented in alternative ways. Like all performance documentation, a deal of faith is required of the audience to believe the veracity of the performer’s claim. Louise Tulett and Shay Launder displayed documentation of a performance where, we were told, Louise had continuously crossed back and forth across a busy Wellington road, non-stop for ten minutes. The missing element of the audience actually being there added intrigue to the work. Not nearly as much intrigue, however, as was generated by Sean Kerr’s claim that for his performance SHUTEYE he would have ‘spontaneous, undocumented narcoleptic episodes’. 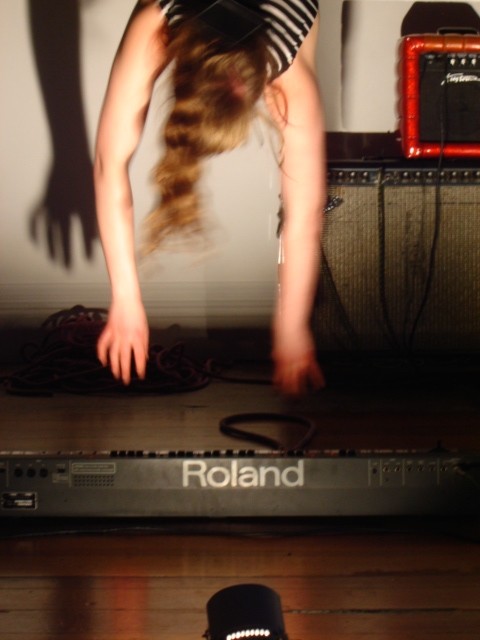 These were to be performed from Auckland where he lives and so were unable to be verified. Little was given away too about John Borley’s performance CARPARK. Viewers were notified that this would occur on Cuba Street, at lunchtime, everyday. Reports were given of people meeting in the car park next to the gallery, sometimes the same people, sometimes a sole figure waiting on a seat. Was this a performance? We were left asking. With no sure way to find out, I found myself staring at the passersby from the galley windows questioning the naturalness of their movements and observing their interactions.

What constitutes Performance Art is still a rich area of exploration, even forty years on from its heyday of the sixties. It is an investigation that is sure to continue and is therefore guaranteed an ongoing place within Enjoy’s programme.