Performance Art has a rich history both internationally and locally, with a tradition of both artist collaboration and institutional support. However, as an artistic medium, performance remains difficult to quantify or define; this may go some way to explain the reluctance on the part of contemporary New Zealand institutions to programme, support, or market performance-based work on a regular basis. Enjoy is in no way exempt from this difficult position- setting three week programme slots when calling for proposals would seem to leave little room for temporal, event-based projects.

So, in what we promise will become an annual event, Enjoy programmed a Performance Week. As we began thinking about possible artists it became clear that we were going to be dealing with an incredibly broad range of work. From each 24-hour period to the next, the walls of Enjoy would witness a complete shift in performer/s, duration and audience. At some points the gallery would be overflowing with noise and people and at other times an artist would be performing alone in a completely empty gallery. 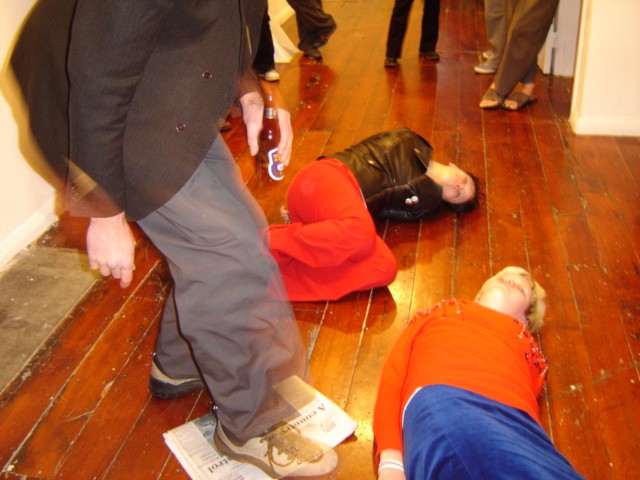 Colin Hodson opened the week with his evening performance Ease. Colin (who recently departed the shores of Wellington for the narrow streets of Amsterdam) bound fellow film maker Campbell Walker and partner Grace Russell, lay them on the wooded floors of the gallery, and invited viewers to stand and sip a beer with him while his captives lay at their feet, heads resting on folded newspaper. Repetitive music loops emanating from speakers wrapped in plastic shopping bags added to the general un-ease of the atmosphere, as eventually Colin’s strategy revealed itself: to tie up as many people from the audience as he could. And while Colin’s overly attentive behaviour to his participants suggested trust, some brief Internet research to assist in the description of Colin’s tying methods led me to bondage websites and on-line sex shops; my wish to avoid public association with dominant/ submissive role-play meant I gave Colin a definitive NO as he navigated the gallery during the performance prospecting for volunteers. Months after Performance Week had finished I still got strong responses to Ease ranging from anger to frustration to bemusement to humour. 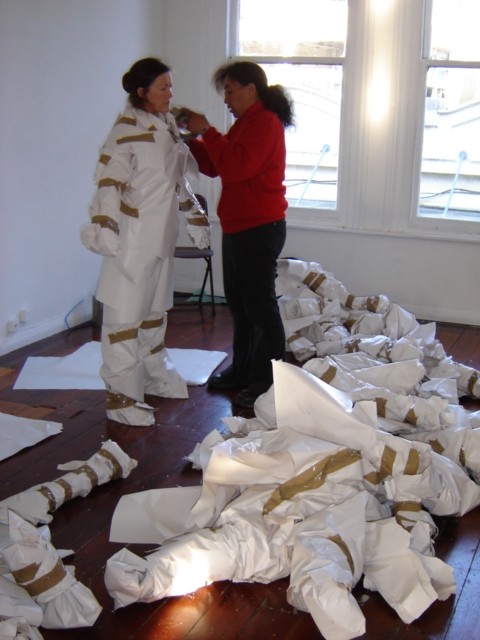 Who am I Where am I by Vivien Atkinson

Tuesday’s performance Who am I Where am I involved the arduous wrapping of the artist in the gallery over a two and a half hour period. Vivien Atkinson employed a woman from Grace Removals to wrap her as she would a prospective package in preparation for transit. After Vivien was completely covered in newsprint and sealed with brown packing tape her employee would step back to watch Vivien struggle out of the many layers of paper leaving behind a ghostly body-shaped shell. Vivien would then lay this shell on the floor; eventually making a crumbling semi-circled wall separating her from the mostly silent audience. A dog-tag (specifically made by the artist) was yanked from Vivien’s neck and ceremoniously placed on each discarded shell. Who am I Where am I was part of Vivien’s continued investigation into the contemporary manifestation of geographical Diaspora.

From 12 noon till 12 midnight on Wednesday The Amateur Music Club (aka Shay Lauder and Louise Tulett) performed the same song on the hour every hour; a public display of the process and concept of practice (an appropriate word that straddles both the music and art communities).

The Amateur Music Club played on into the night to an audience consisting of drop-ins (myself included) and die-hard fans who occasionally joined in. I dropped in for the 7pm showing and watched Shay and Louise (both had removed their shoes) plucking at electric guitar/bass and singing into amped microphones with a rare rock’n’roll sincerity as they attempted a version to beat 6pm. After debuting at Enjoy Performance Week The Amateur Music Club graced the stage at the Enjoy Christmas party and are currently working on extending their oeuvre. 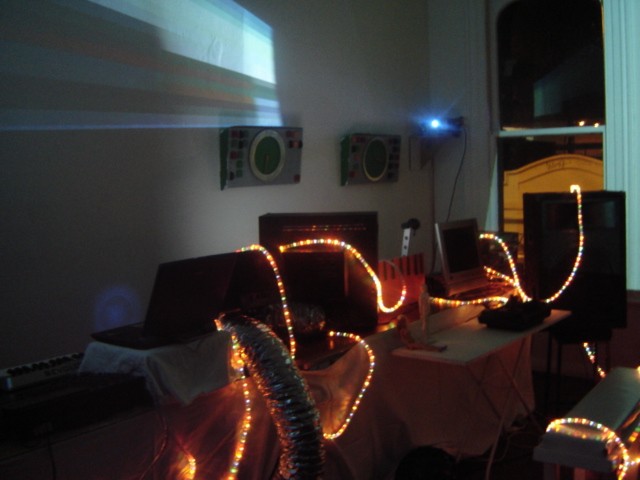 Friday night saw the culmination of The S.T.A.F.F Project, drawing together five weeks of public fundraising led by Bex Galloway and Sarah Miller that included a car wash, bake sale and sticker appeal involving over 30 local artists, writers and curators. Billed as the event’s ‘Grand Finale’, The S.T.A.F.F Project invited members and guests to a night of self love and Polaroid madness featuring photographers Victoria Burkinshaw, Gavin Hipkins, Courtney Lucas, local DJ’s Jack Uzi and The Hollywood Alpha Male, and the welcomed support of 42 Below. Part clap-happy nepotism and part critique, The S.T.A.F.F Project commented pointedly on the self-sustaining nature of our creative community.