You better watch out...

A few years ago when I moved up to Auckland I found myself left out of the clique of those who had in common the terrifying childhood memories of the large fibreglass Santa, annually brought out to adorn the roof of Whitcoulls on Queen Street. Like the bucket fountain to Wellingtonians, Aucklanders shared a love/hate relationship with this creepy, three storey high monument to kitsch. The overall shoddiness of its construction, his inane grin and, perhaps worst of all, the mechanical finger beckoning customers inside were the key to its uncanniness. Tim Armstrong’s exhibition A Christmas Story had touches of this same unnerving celebration of tackiness. 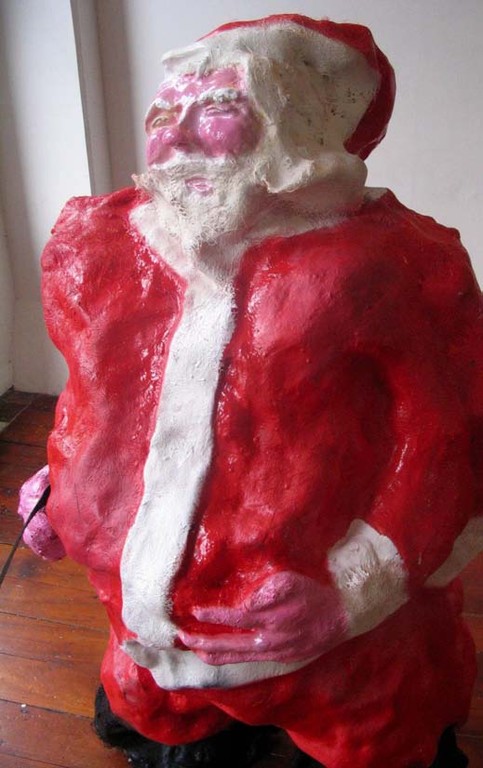 Tim refrained from perhaps the more obvious strategy of bombarding the gallery visitor with Christmas paraphernalia, and instead presented a somewhat restrained and minimal exhibition. The central work was a life-size fibreglass Santa Claus whose benevolent smile was belied by the scythe (in place of the usual sack of toys) he held in his hand. It seemed apt that the intended motorised action, ambiguously either a jolly ho ho ho/stabbing movement, failed early on due to technical difficulties. This blobby creation had the well-worn look of a mannequin who’d seen far too many Christmases, ravaged by time and sun but still placed in a shop window to get shoppers in the festive mood. Here in the gallery he seemed to look out the window to Cuba Street, casting a judgmental eye over the people passing by, ready to slice up naughty children and adults alike.

Two smaller figurines were roughly modeled out of paper-maché WAREHOUSE brochures. They were lumpy and disfigured creations, as if the blurred images of frantic shoppers in motion. But in their spacious surroundings they also had the appearance of Ancient Romanesque statues. Gods and goddesses of shopping and THE WAREHOUSE is the temple at which they are worshipped.

A small portrait of Santa hung in one corner, painted in a faux-naive style, looked like the type of painting you’d find in a Salvation Army family store. However in this instance he had become a ‘dirty old man’ standing at the top of a Shopping Mall escalator, finger crooked and without pants, showing off his bright pink bulbous thighs.

The video-loop was the most confronting work in the exhibition, aurally filling up every inch of the gallery space. Tim took a few seconds of fuzzy security camera footage from THE WAREHOUSE and looped it to play ad nauseum. The shot is framed within what could either be a Christmas star of Bethlehem or the star burst shape so commonly seen in post-Christmas shop sales. I felt the video accurately captured the sickening experience of sensory overload one can feel when entering THE WAREHOUSE. The size, the scale, the shoppers, the lights and colours seem designed to dazzle and confuse. The accompanying soundtrack was recorded from a ‘Christmas in the Park’ event at the very moment when ‘Santa’ arrived. An excited warbling Jackie Clarke led a band in a rendition of The Bee Gees’ ‘Night Fever’, her voice getting increasingly shrill. The audio was recorded by such lo-fi means that other voices interrupt and the music crackles with distortion. The customers in the video seem to disco dance, jerkily strutting forward and back, captured for eternity as slaves to the music. This brain-dead shopper idea is one that has seen in pop culture before, most memorably in George Romero’s ‘Dawn of the Dead’, a horror set in a shopping mall. THE WAREHOUSE location transplants the concept to a recognisably New Zealand context.

Tim’s interest in Christmas was originally ignited by his study of ancient pagan mythology. The Father Christmas figure has throughout time featured in several different cultures in various incarnations of the same theme, our modern concept being a marketing invention of Coca-Cola. Subtle references to this study were sprinkled throughout the show; Santa’s scythe a reference to the pagan figure of Saturnalia who also carried one for example, but Tim’s focus was really on the contemporary.

Tim’s conclusions may not have been surprising or profound, but were enjoyable nonetheless. A Christmas Story was a fun examination of festive consumerism, society’s complex relationship to kitsch and our blind following of mainstream traditions.