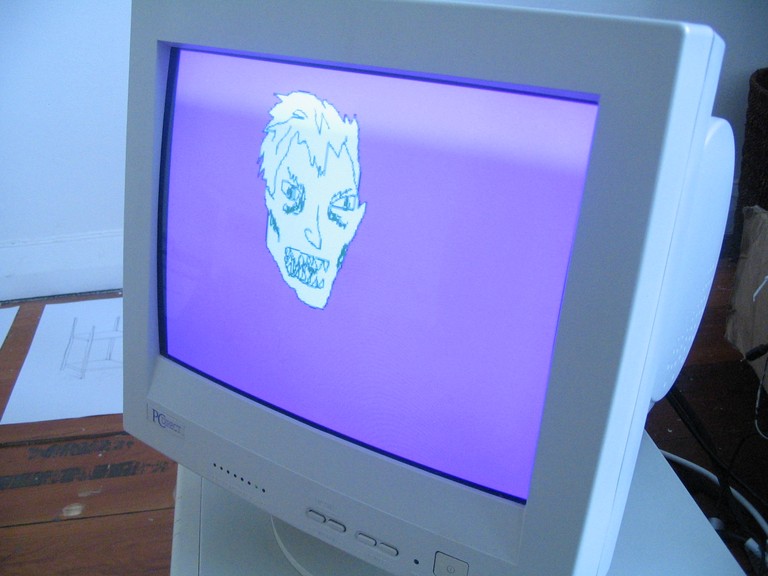 Auckland-based music/performance group Golden Axe (Dave King and Chris Cudby) exhibited at Enjoy in September of 2004. I talked to Chris about the successes and challenges of the exhibition.

Jessica Ried: Not long before coming down to Wellington for the exhibition, the building that you had your studio in, in Auckland, was sold. In that instance you had turned your studio into a gallery (SPECIAL gallery). In this case though, you turned a gallery into a studio...

Chris Cudby: It was pretty handy to use Enjoy as an alternative studio (SPECIAL had closed about a month before, but re-opened in February 2005). With SPECIAL we had a walled off entrance/foyer area which was the gallery space and studio/practice areas next to the gallery. We were keen to show our process of putting together sounds and tunes and making merchandise for the band, as well as displaying the found materials from which we constructed a stage area. We make each Golden Axe CD package as a unique object. The ones we made at Enjoy had different logos to the old ones and had an original drawing slipped inside, so a lot of our time in the gallery was spent making packaging. Every 'Golden Shakehands LP' CD has a different cover made from old record sleeves with stencilled artwork.

J: The exhibition worked with some difficult aspects of art practice; collaboration, in a new city, using a 'process-based' style of show. What did you find most challenging about this particular show?CC: Dave and I have been collaborating on-and-off for a few years now. We'd never placed ourselves on display in a gallery space for two and a half

C: Dave and I have been collaborating on-and-off for a few years now. We'd never placed ourselves on display in a gallery space for two and a half weeks though, and the reality of the gallery being a public space did take some adjusting to. It was interesting to put ourselves in that position. The exhibition developed in spurts. We had our basic opening show, and then we started recording and bringing up stuff we found on the street and in Op shops.
The new city element was interesting. The Meatwaters festival was going on at the same time, so we got to meet and hear lots of new and unique people play. We didn't know many people when we went down, but the hospitality of people we barely knew was really amazing.

J: How did visitors react to being able to see you at work? I wonder if the reality of watching someone at work in their studio is as interesting as it might sound. Have you heard about those art-interest groups who do tours of artist's studios in Auckland?

C: Everyone had their own reactions, most people were keen to have a chat but we didn't mind if people would have a quick look and then leave. It was good to do our closing performance to a crowd on Friday night when we were practising in the gallery for most of the day; people could have come up earlier and seen the same show! An art group of Remuera housewives would have been good but we had to make do with a visit from an Art history class of Catholic schoolgirls and a ninja. Aside from us working in on the closing performance, there was video documentation of previous performances, computer animation, prints, and our walking frame/pram constructions which were displayed as sculptural objects.

J: How much, if any, of a distinction do you make between your work as an artist and as a musician?

C: I don’t make any distinction between the two ideas, though I think it's interesting when people try to separate them out. For our show at Enjoy, we were writing all of the music that we played at our closing performance inside the gallery space. That blurred things a bit and it took time to adjust to people coming into the gallery when we were figuring out how to play our tunes. Improvisation is a big part of Golden Axe. We record chunks of us jamming for hours then we listen back and pick out sections that we like, and then structure things from there. It's a fun way of doing things. I'm not a very good musician so I have to practice lots. We generally play composed tunes with some improvised parts. If we're playing outside it gets a lot looser. For points of reference we enjoy the works of Boredoms, Destroy All Monsters, the Forcefield collective and Suck Dog among many others; groups that work confidently and in both sound and visual mediums. Plus, it’s not a total revelation these days that visual artists are involved in music/sound projects, is it?

J: What you wear on your heads is one of the most distinctive things about Golden Axe. You describe them as masks, but they seem to me more like disguises, as they're a combination of things which seem designed to distract attention away from you as individuals. I found it amusing that people would confuse you and Dave a lot

C: People do get us confused when we play. If anyone wants to know, I'm usually the one with the pram, David's got the walking frame and wave-form generator. When we played outside the last Sonic Youth concert Dave had his hoodie pulled over his head and trucker shades on and I wore a lampshade on my head. I don't know if you could define those as masks or not (it’s illegal to wear a mask after sunset in public), but they were definitely disguises. We wear different outfits at every show, mainly made from found materials. At a recent show, Dave strapped some tree branches to his body and you could see his smiling bearded face clearly.

J: One of my favourite parts of your show was the catalogue/comic which you gave to everyone at the closing performance. As I was quite involved with your show I was interested in your interpretation or spin on the way the exhibition panned out. Was this part of your motivation to produce the comic?

C: Thanks. I'm glad you liked it. The aim of the catalogue was to clarify some details about the show and to give credit to the people who worked with us on the exhibition, as well as to give some idea of the processes involved in putting the show together. It was good to produce something that people could take home as a souvenir. Producing the catalogue dovetailed nicely with the series of Fast Comics I've been making, which were recently available at both Enjoy and Room 103. Yep, I definitely put my own spin on the exhibition, but I think it was pretty faithful to what happened.

J: It was also a very generous gesture. Would you agree that GOLDEN AXE has a philosophy of involvement and generosity?

C: The main reason the catalogue was free was that it hardly cost anything to make and I wanted as many people to get a copy as possible. We've generally been pricing our CDs quite low so that they're affordable to people who want them. We're working under the assumption that, like us, most people in the gallery won't have too much disposable income kicking round.
Thanks for saying we're generous, we ask people to be generous too sometimes.

J: You said your only other experience of Enjoy was when you visited the 2004 summer residency (Liz Allan, Mendt) and this mode of working influenced your perception of the sort of projects Enjoy facilitated. Do you think your proposed project would have been different had you come at a different time of year?

C: The content of our proposal may have been influenced more by the Enjoy proposal guidelines, specifically how exhibitions should 'engage with the politics of the space'.

J: Tell me about your busking experience in Wellington. I think I recall you guys earned about $17 after half an hour in Cuba Mall on a Saturday afternoon.

C: I forgot to bring my battery-powered amp down to Wellington, which initially nixed any outside performance plans. However, someone told us about these outdoor power points which are free to use in the middle of Cuba Mall, so we took our gear down the road and did a show. We got a good crowd and the weather was good too.