In association with Wellington Architecture Week... 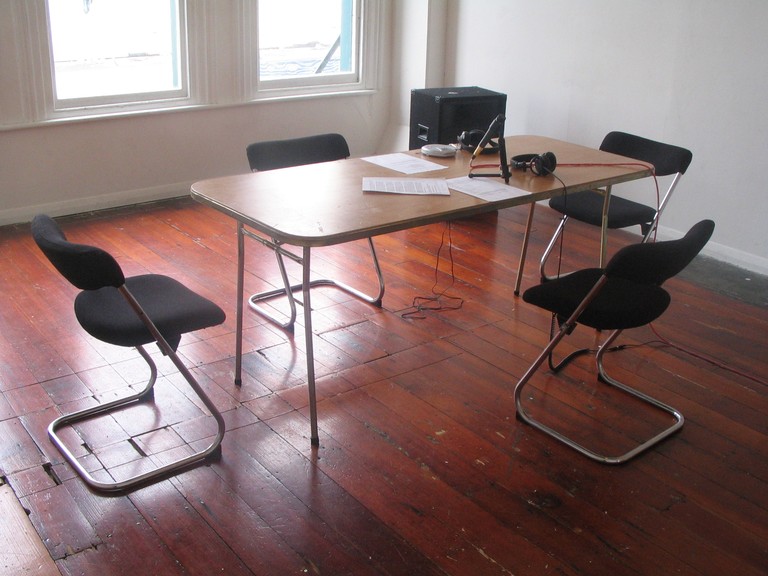 I have a passion for art and for pretty things. I am, like most westernised human beings thoroughly reliant on my vision and value it as a means to survive and appreciate the world in which I live.

Technology has developed throughout the last two centuries to create a visually voyeuristic society where the dominance of the sense of sight is unrivalled. From the camera obscura to photography, film and digital technology, we think it normal to see the most intimate of imagery from invasive surgery and forensic pathology to sexually indecent (or not) acts.

The knowledge that vision is privileged is discursively well-known and has inspired forward thinking individuals to challenge its dominance and to broaden our understanding of how other senses affect actions and emotions and influence our way of life. For artists such as painters and sculptors, this provides an interesting challenge because art, historically, has most often been about the aesthetic, at least until the 1970s when conceptual art and theory gave rise to new ideas about what constituted art and shattered many established norms.

However there is still the preconception that when one walks into a gallery space one will see something, whether it is pretty, shocking or merely dull, it will still be there for the ‘viewer’ to consider. It was therefore with trepidation that I entered Enjoy knowing I would encounter a ‘sound installation’, but not knowing what to expect visually or aurally.

I decided to write about Bevan Smith’s sound installation because it was exhibited during architecture week and architecture and its general rigidity and, therefore, potential to be deconstructed has always interested me. Architecture is also a multi-sensory artistic experience. The theorist Juhani Pallasmaa, in his essay ‘Hapticity and Time’ has argued that qualities of architecture such as matter, space and scale are measured by the eye, ear, nose, skin, tongue, skeleton and muscle. Architecture can speak to all the senses at once; it is the ‘simultaneity of experience and sensual interaction’.

Pallasmaa goes on to discuss the sense of touch, arguing that all the senses are extensions of touch, and that our skin is proof of the primacy of the tactile realm. Using medical evidence about the skin being the oldest and most sensitive of our organs he states that ‘even the transparent cornea of the eye is overlain by a layer of modified skin’ thereby confirming touch as the parent of our eyes, ears, nose and mouth; before we see we touch. Touch is, however, the most underrated of the senses and the main point in Pallasmaa’s essay is that, because architecture is a fusion of all the senses, it is therefore its task to make visible ‘how the world touches us’; to get away from the retinal based wank of our time and to conceive of a haptic1 and sensuous architecture:

For me a ‘sound installation’ as an exhibition conjured up notions of a noisy construction, a kinetic sculptural piece that might project sound into the gallery space. However knowing that Smith is a recording artist I also (wrongly) conceived of an instrumental ensemble. On entering the gallery space, I was confronted with whitewashed walls, glaringly devoid of decoration and causing my pupils to contract. Enjoy contained only a trestle table placed in the middle of the gallery and set up like a listening post in a library—there for the comfort of the ‘listener’ only. On the table was a portable CD player, a set of headphones and opposite, a microphone. Cables were neatly taped down running across the floor. There were four chairs around the table and at each place was an A4 sheet of paper explaining to the participant what to do and what was on the CD in the player.

The CD contained an archive of voice and music samples that had been recorded through different spaces and materials. There were eight tracks each containing four audio samples repeated eight times after being processed through the space or the material. The first track—the Adam Art Gallery; second—St James Car Park; third—hallway at Smith’s home; fourth—Massey, Buckle Street, upper hall; fifth—stairwell at Enjoy; sixth—Steel Handrail; seventh—Wooden Floor; and the eighth—Concrete Floor.

The samples were Smith’s voice recorded in his home studio repeating the words ‘One…Four’, a snare sample from Akai MPC sample library, and a Gibson guitar chord played by Les Paul through a Peavey Classic Amp.

On reading the information in the silent, empty gallery space I slipped on the headphones and listened. It was bizarre knowing that only I could hear, it internalised the experience making it seem almost imaginary, no one there to confirm the sound I was hearing, no one to share the experience with. In some respects it was an intimate insight into an ulterior reality similar to the experience of hearing different music for the first time without the distraction of people or other sensual stimuli. After hearing the words ‘one…four’ over and over I could feel them being etched onto my mind. As words go they sounded like commands repeated into a microphone to see if it is working, ‘testing… testing… one… four’. Smith’s choice of words was, I believe, random and they served only to illustrate the difference inherent in the sound as it is recorded through architectural space and element.

After listening to the sound recordings I eyed up the microphone, and read the instructions—speak, sing, clap hands, make a noise into the microphone—and depending on the day of the week it will be processed through a range of architectural spaces and elements, from the Adam Gallery to a concrete floor. The white noise inside the white space of the empty gallery seemed deafening; I was overcome with timidity at the thought of hearing my voice through a steel handrail, so I left the gallery. The installation played on my mind and the extent to which the recording samples distorted according to the space and element they were processed through was interesting.

The installation made me think of Pallasmaa’s essay ‘Hapticity and Time’. Beyond the tactility of architecture our experience of it is influenced by the sounds we hear while in a space, from necessary and perhaps more abstract noise like movement around a space, footsteps and breathing, to deliberate noise like voices and music. Sounds enacted in an architectural space take on many different forms. We are all too aware of the aesthetics of a space, but when faced only with the aural qualities of an architectural space, ones interpretation of that space alters. The visual aspect of space, in Smith’s installation, was left to the imagination, aside from instruction prompts and one’s personal knowledge of Wellington. I tried to guess where the sample was recorded in each track, the car park was the easiest, the sample echoed slightly and came across as deeply oppressive, and I could almost smell the petrol fumes and feel the cold concrete, airy space. Smith worked with a computer software technique called ‘convolusion’, whereby a physical space can be plotted and recorded aurally.

Art as an activity and as a product has always battled with the assumption that it (as Oscar Wilde stated) has no inherent use, that it is essentially useless. At times I have considered art a frivolous luxury, decoration for the affluent. It is not practical. It does not portend to cure cancer; but to deny art a use is to deny culture, or worse, to deny a culture the means of expression. If the accentuation is most often on the visual in art, it is easy to neglect other senses and it is easy to wonder what the role of art is or should be. The viewer will remain detached, looking at, but not involved in art. If, however, the experience of art is all encompassing, something we can touch, hear, taste, smell and see, we are more likely to remember it. It is more likely to alter our reality and way of thinking and affect us emotionally, even if just for a moment. Smith’s installation, in my opinion, seeks to redress the sensory imbalance, privileging the aural. It does not attempt to address other senses but humbly draws the listener’s attention to the pervasive sense of sound and how we experience it depending on what space we are in. The installation requires interaction and involvement without which there would not be art.