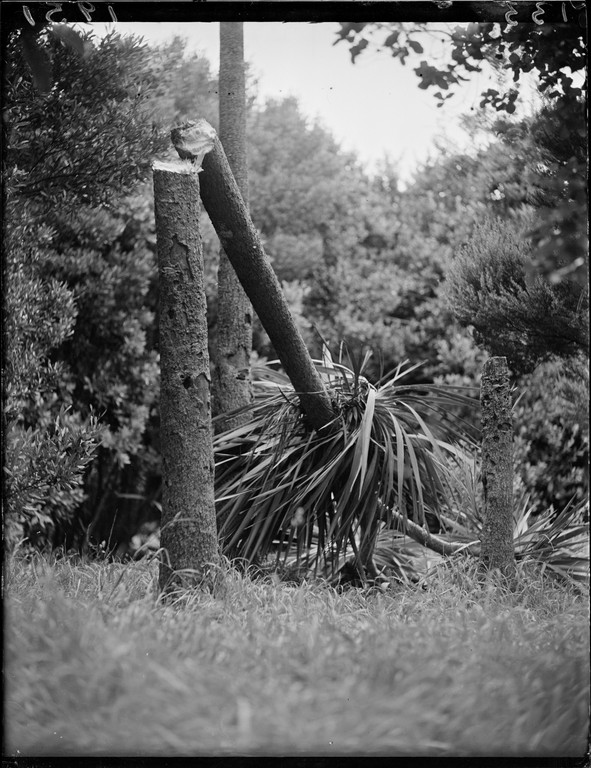 Bronwyn and I were sitting in the National Library’s café when she first showed me the photograph. The image held enticing metaphorical potential and seemed to open out in front of us as we talked it through. There is a traceable history in New Zealand of politically motivated destruction—of cutting down trees as acts of protest. We talked about Hōne Heke chopping down the British flagpole at Kororāreka in 1845 to protest the Crown’s activity in the new British colony, and the attacks by Māori activists on Auckland’s One Tree Hill. The mana and cultural significance of trees was also evidenced more recently in local history when the Wellington City Council prosecuted a property development company for chopping down a heritage kōwhai tree on Tory Street in central Wellington.1

Bronwyn conducted some further investigations, searching through archived microfiche of the Evening Post from early 1951. Her search yielded a short article dated 24 January 1951 which stated that “several cabbage trees in the vicinity of the Dominion Museum and Art Gallery in Buckle Street have lately been cut down.” This was the work of an “unknown vandal” and “police were investigating.

The photograph was compelling in its depiction of a violent act but also abstracted and muted by its lack of detail. The vandal and their specific object of protest was going to remain elusive. What could have motivated this action?

In 1951, the year the photograph was taken, New Zealand was marked by both it’s participation in the Korean War and the Waterfront Dispute — which remains “the most expensive industrial dispute in New Zealand history”.2 The dispute lasted 151 days, involving 22,000 waterside workers, and even led to the government of the day forbidding the public from supplying wharfies and their families with food.

As the dispute dragged on, extreme “emergency regulations” were put in place by the government that gave them the power to “seize union funds, use the armed forces to replace strikers, and prohibit strike meetings or publications.”3 Leaving the wharfies out of money, and unable to access food, the government played a dangerous waiting game.

Those who are weak and powerless are often the most affected in situations of public unrest. This particular situation lead to Labour MP Mabel Howard calling the dispute a “war on women”4 due to the effect these regulations had on the families of the wharf workers:

The wives of strikers had to survive with no income, and it was illegal for anyone to help them. The regulations applied to children too. In Wellington’s Clifton Terrace primary school, strikers’ children were separated from other pupils during playtime in case they illegally shared their lunches.5

Much of the action surrounding the Waterfront Dispute was centred in Wellington—as the seat of government, and home to many of the striking workers and their unions. It is entirely possible that the attack on the cabbage tree was a reaction to this situation—a rogue public intervention in a carefully-controlled government site of symbolic remembrance.

Stories such as these form part of the bedrock of the modern day civic construction taking place in and around Buckle Street, Wellington. The area has been redesigned by the government, accommodating a recently completed cut and cover tunnel. Paving over this tunnel will be a new National War Memorial Precinct, including green public spaces and walkways designed around the current National War Memorial and the Tomb of the Unknown Warrior.

The construction of a specific “precinct” for memorialising, one which is civically cultivated and sanctioned, is a complex and tenuous proposition. As John Horrocks writes in his essay ‘Memorials and Medals: Pinning on the Past like a Decoration’:

The National War Memorial in Wellington is all about overseas wars. Battles closer to home are not recognised there, yet the New Zealand Wars of the nineteenth century are arguable at least as significant in New Zealand’s history. It is doubtful whether many of those who attend ceremonies at Gallipoli or visit the cemeteries of France have even visited the sites of the clashes at home.6

Horrocks’ essay unpacks the politics and ideologies of public memorial sites, discussing New Zealand’s monuments alongside similar projects overseas. The author acknowledges the structure memorial sites provide to allow for collective acknowledgement of past trauma and sacrifice, but he also foregrounds the “fluidity of national fortunes and the futility of basing national pride on these foundations.”7

Located directly on the site of the new National War Memorial Precinct’s construction the cabbage tree photograph seems to act as a cypher. It asks important questions about who and what gets remembered, and how remembering is choreographed and organised in public space. The photograph of the vandalised cabbage tree chimes with the counter narratives and questions raised by Horrocks. It cuts across the proposed formal purposes of the precinct and covertly suggests undercurrents, disruptions, and tangents to the narrative of mainstream understandings of New Zealand’s national identity, so often associated with World War One and its aftermath.

Angela Kilford is one of Massey University’s recently graduated MFA students and, like the other students and staff at Massey, has been surrounded by the construction and disruption of the National War Memorial Park for several years. Kilford decided to focus on this activity in her work Walk With Me which invited participants to join her in a walking tour of the construction site.

Bronwyn and I joined Kilford and a small group of other walkers on a sunny Wellington day on the steps of the old Dominion Museum building. Kilford’s tour discussed the existing memorials and the government’s proposed plans (including the intended metaphorical significance of parts of the park); the pre-colonial Māori history of the area, and the logistics and engineering of the park’s construction. Walk With Me built up a dense and layered image of the National War Memorial and the space’s previous history.

Kilford’s work was notable in its objectivity. The artist didn’t judge the features of the proposed re-design or the development of a “nationally significant” space, she simply pointed out the different aspects of the site and allowed the acts of walking and talking to incrementally build up a sense of the space’s multiple pasts and how they ran counter to, or aligned with, its proposed future as the National War Memorial precinct.

After taking part in Walk With Me, Bronwyn showed me the spot on Massey University’s grounds that, in her opinion, best matched the geographic features in the photograph from 1951. Bronwyn had researched the growth of cabbage trees since finding the photograph and had found that — due to being rhizomatic — they are persistent and robust and are able to create multiple growths from their main trunk, even when beheaded.

There are many cabbage trees dotted around the site, but only one matched the terrain. At a spot near the front of the former museum Bronwyn held up a copy of the image to illustrate the vantage point and angle of the photographer. Standing there now is a healthy cabbage tree. 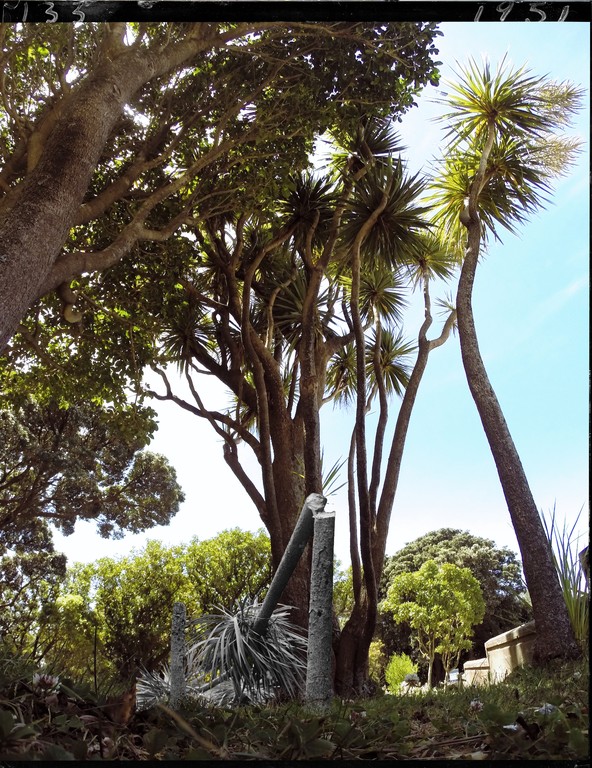 Bronwyn Holloway-Smith is an investigative artist based in Wellington, New Zealand. More at http://bronwyn.co.nz

Thomasin Sleigh is a novelist and art writer based in Wellington.