On the portraiture of mushrooms

Each mushroom is what it is – its own centre. It’s useless to pretend to know mushrooms. They escape your erudition. 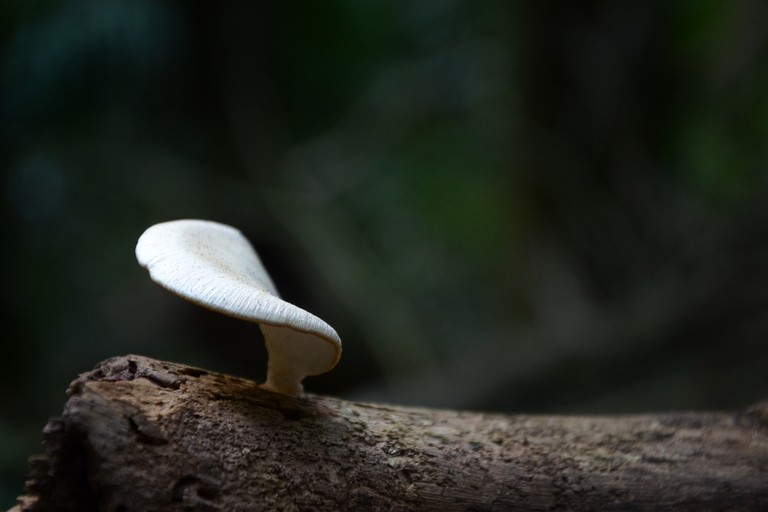 Some hue between cream and white, it was poked like a tongue from a log of crumbling wood. That means the resident fungus was digesting the wood and causing it to crumble. Sly, unseen, it eats its own habitat. Then it has to make forms to perpetuate the species. The forms, the fruit, release the spores that hold the germ and the secrets of its life. The spores get taken away in the wind to land on another log, to grow there to eat it to make it crumble away.

The timing has to be right. After rain is good because then its cells swell with what it has absorbed, and then it has enough water pressure to be able to thrust a form up into the world. That’s a guess based on my cobbled understanding. Even if it is correct, there will still be other factors in a fungus’s timing when it expresses a mushroom. Heat energy, food resource, fear of death. Water turgor is not the whole story.

This one made a wave form. We had never seen one like it. We were with a batch of scientists and they had not seen one before either, which does not mean it was a form with no name, but hundreds of thousands of mushrooms do not have names, have not been given spittle by anthropo-tongues, and so it is not far out to say it could have been an unknown, an abstract form with no symbols affixed; linguistically a nothing. If a mushroom grows in the forest and no-one is around to name it, does it still exist? Yes man, you arrogant fucker.

She took a photo of it. She took many more. Later, we descended into the technical and the mundane stage of our quest. We are not scientists. We just want to see and record and reflect beauty, including ugly beauty. Mood, form, character, age, ancestry, mystery. Mushroom portraiture. We ate ice-cream that had been half-defrosted and then refrosted and become crystalline. Caramel and macadamia, that nut particular to Australia. Some people travel for the sake of mushrooms.

She edited images. I grizzled about my camera’s bewilderment by white, the way it squeals out the hue, and she counselled me on that. She showed me this delicate wave form on the screen of her laptop, crisp against a leafy haze, and said she was very happy with that photograph. “Peaceful,” she reflected.

What I did wrong there. I have been told more than once by mycologists not to casually refer to mushrooms as the ‘fruit’ of the fungal organism. They would prefer I said ‘fruiting bodies’ to distinguish from fruit as in the red and orange orbs that grow on plants, because they are sick of people conflating fungi with plants; they are sick of it. That conflation is the main thing wrong with the world. I agree with the latter view but I also think if we could all please just absorb the fact that fungi are not plants, then it would be OK and even useful for us to describe mushrooms as the fruit of fungi. For one thing, the distinction is spurious: what is a fruiting body if not, quite expressly, a physical presence of fruit? For another, fruit is a common term before it is a scientific one, and fungi have as much right to it as any other kingdom of life.

If we could refer to mushrooms as the fruit of fungi, that might improve the level of public interest in them. Fruit used as a gateway word.
What are mushrooms?
Mushrooms are the fruit of fungi.
Right, I am with you so far; please tell me more about fungi.
Some mycologists have an even greater preference than fruiting bodies and that term is ‘spore-bearing structures’, because that is also what mushrooms are, but scientists who seriously advance that term for common usage have no appreciation of populism.

Did I also hint that fungal decision-making on when to fruit could be influenced by an emotion such as fear of death? Yes. Even to hint at fungal decision-making is wrong; attributing traits or abilities presumed to be exclusive to humans is all wrong. Also, to say a fungus is expressing itself when it generates a mushroom might be wrong: it would depend if I had meant that in a scientific way as in gene expression, or in an artistic way as in the feelings-influenced choices of colour, form, location and timing. I meant the latter, because I conceive of mushrooms in that way, which therefore is another wrong.

Sometimes scientists will arrange the relative locations of trees and fungi on a graph. The fungi, being ever present with trees but far less apparent than them, are located by their DNA in the surrounding soil. I cannot read such a chart, apart from reading it as a static image, as a mathematical abstraction of a forest. I have seen one that looked a little like this.

A mushroom species I had recently met and was newly admiring led me to stumble upon the graph. I was googling the mushroom. The graph depicted data from a southern New Zealand forest in which this native species had been recorded. The fungus may have been represented by an S-number somewhere on the graph, but I could not read it so I do not know. Being a shade of green conventionally associated with space aliens, the species has been named Cortinarius alienatus.

A verbal abstraction may be as futile a way of depicting a forest as a mathematical one, but we are all entitled to our own exercises. I met Cortinarius alienatus in a native forest in the Tasman district, in a dark and tranquil place that I can still smell. Earthy and wet and rich with soot from the benign black mould on the beech trunks, sucking slowly with decay, its unseen saprobes drawing bush detritus downwards, groundwards, arranging all into soil. This particular fungus had other business there: it was making love to a beech root.

I have been told more than once by mycologists not to casually refer to the mycorrhizal relationship as lovemaking. The fungus forms a sheath or sheaths around the tree’s root or roots, and spreads out into the soil to imbibe nutrients it then shares with the tree. Thus embraced, the tree shares—or is believed to share—carbohydrates with the fungus, which the fungus cannot produce for itself because it cannot perform photosynthesis. Most trees are involved in this sort of relationship with numerous fungal partners simultaneously, and they remain entwined in perpetuity. I need you. I want you.

They were not supposed to be from the genus Mycena. In my imagination the Mycena mushrooms are all identified easily by their small size, their coloured flesh that aches with light, and above all their mushroominess. They look like little mushrooms. They have gills, long thin stems, and their caps are the shape we associate with mushrooms. According to their nomenclature, we also associate that shape with bonnets, parasols, and infantry helmets circa World War 1 (not the wars of today which use a rounded head-hugging helmet). Just a few of the common names given to Mycena species: ruby bonnet, angel’s bonnet, pixie’s parasol, stump fairy helmet, bleeding fairy helmet. All are very mushroom-looking species. Mycena is Greek for mushroom. Mycena, the mushroom’s mushroom.

Dusky pink, or by some interpretations mauve, they evoked my favourite time of day even in the late morning. I wanted to photograph them and did so. I did not know what kind of mushrooms they were. They were glowing softly from a log in the beech forest. I knew they were saprobes, digesters of dead tree rather than lovemakers to live tree, but it did not occur to me they could be Mycenas. Their stems were too short, too thick, and their caps were misshapen, by my standards for the genus. My standards are unscholarly. As if mushrooms, the most diverse of beings, would adhere to standards anyway.

Mycena species often act as vanitas objects of the forest. During your travels through the scenery you, the wanton aesthete, sometimes remove mushroom specimens. You will hand them over to the mycologists for their inventory of what fungi dwell where in New Zealand, thus making yourself useful so they will in return lead you to more mushrooms in the future. But you are more debased than simply that. You remove specimens because they are beautiful, because you think you can somehow keep them, and keep them as they were when they first met your gaze; you hand them to others so that the beauty you have collected in solitude can be acknowledged upon your re-entry to society as yours, as associated with you yourself, a beauty you have personally captured. You vain thing.

Many mushrooms will participate in your depraved scheme, holding their form and colour, losing only their forested backdrop—although that is no small loss—when you take them elsewhere. Many Mycena mushrooms will not participate. I have never met one that did. From the minute you pluck a specimen from its home, it begins to shrivel, and its flesh is drained of light, and so of colour. What was slight to begin with becomes a tiny withered thread with a tiny withered head sitting in your palm. You have to use words to describe its former glory to the mycologists back at the lab, so they might be able to identify it without having to go technical and stick its spores under a microscope: “This one had a velvety grey cap,” or “This one bled a red juice when cut.”

These pathetic attempts to invoke the dead only emphasise the terrible loss of the form and its vitality. The specimen returns to dust as you speak.

Had I recognised them as dusky pink Mycenas, I might have left them in the forest. Instead I saw them only as mushrooms I had not seen before, and therefore as objects that might be of interest to my scientist symbionts. I took their photograph and then I took them. A mycologist collecting nearby told me what they were. “Oh that’s that odd Mycena,” he said. “Very unusual looking aren’t they?” I handed them to him.

Creek Waddington is a South Islander who lives in Wellington. Creek is interested in contemporary art, in experimentation, abstraction, queer biodiversity, accident, absurdism and rough survival. It naturally follows that Creek is devoutly interested in fungi.